A clingy dog stays abnormally physically close to his human companion, showing signs of distress when not in the same room with the person. The dog may refuse to leave the human’s side, watch their every move, and whine, bark, and attempt to follow the person when they are physically separated. While loyalty and bondedness are typically seen as desirable qualities in a dog, a normal physically and emotionally healthy dog maintains its independence, and is not troubled by short periods of separation. While a clingy dog’s behavior can be rooted in emotional or physical distress, a clingy dog is insecure and wants care, support, and reassurance.

While a clingy dog may be suffering from a behavioral problem, clinginess may also be an indicator of an equally serious underlying condition. A clingy dog should be evaluated by a veterinarian for any underlying medical causes.

Why Clingy Occurs in Dogs

Dogs are clingy for three basic reasons. Your dog may have great anxiety about being left alone. Various illnesses may cause the dog to seek comfort from your companionship. And a female dog about to be in heat may tend to stick closer to her owner.

Separation anxiety entails a dog’s great emotional discomfort with being apart from family members. The dog may even demand to be next to its owner at all times when they are together. Anxiety can lead the dog to engage in destructive behavior at exits and against the owner’s belongings, cry out, salivate, pace restlessly, and engage in repetitive compulsive behaviors. These behaviors usually happen within 30 minutes after the dog’s owner has left, and can occur in dogs of any age and breed.

A dog may seek protection by staying close to it’s owner when the dog has an illness coming on. Aging, while not an illness in itself, can weaken a dog, making it more susceptible to illness. When an older dog begins to lose its vision and hearing, it becomes more vulnerable, and less able to care for itself. Epileptic dogs often cling to their owners when they sense that they are about to have a seizure. Epileptic seizures involve uncontrollable jerking of the dog’s entire body, along with a loss of awareness or consciousness while the seizure is in progress. The seizure episode typically lasts for 30-90 seconds. Beagles, Keeshonds, and Golden and Labrador Retrievers are more likely to be genetically predisposed to seizures. Seizures can be caused by many things, including trauma, toxins, a brain tumor, infection, or may even have no identifiable cause. 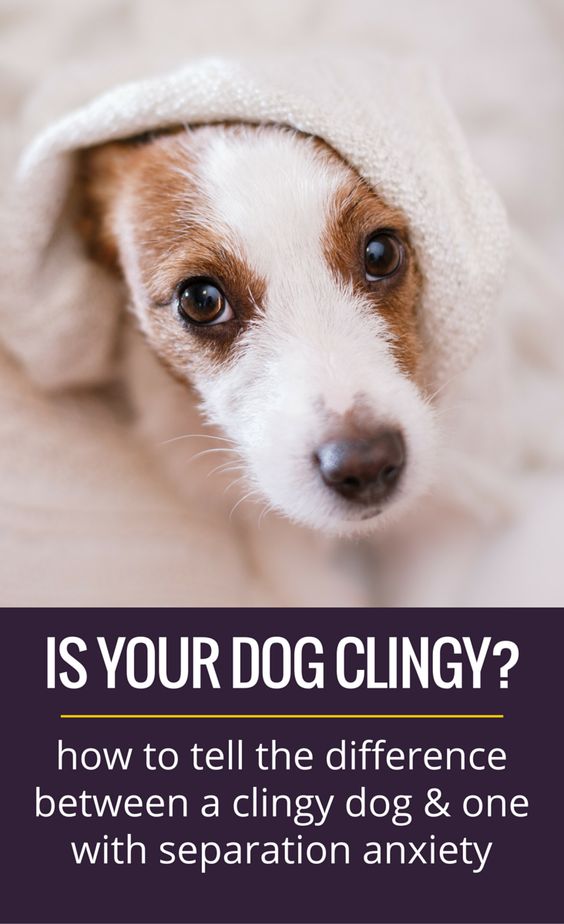 What to do if your Dog is Clingy

If you suspect your dog is suffering from separation anxiety, you should have your dog evaluated by a veterinarian, as similar symptoms can be exhibited by dogs suffering from physical disorders. Separation anxiety is best treated by behavior modification exercises and anti-anxiety medication. You might reward the dog with a treat for staying calm and relaxed on its own, as well as giving a treat several minutes before you leave the house. Long-lasting treats, such as a toy that requires problem-solving to extract a treat, can keep your dog busy and focused on something other than your departure. A Dog Appeasing Pheromone (DAP) diffuser releases pheromones that help some dogs to stay calm.

An illness like epilepsy is a serious condition and requires an immediate veterinary evaluation, possibly followed by treatment. The seizure will probably be finished by the time of the dog’s examination, so a video recording of the seizure episode may be useful, as will a detailed description. Unless it is severe, a single seizure does not require treatment, but should be carefully documented. During a seizure, stay calm, lay the dog on its side away from anything harmful, such as sharp objects and furniture, and relax the dog by speaking to it quietly and gently. As the dog may not have awareness or bodily control, keep your hands away from its mouth. If a dog has a very severe seizure lasting more than a few minutes, or has more than one seizure within a six month period, the dog may need to be prescribed a maintenance antiepileptic drug to control the seizures.

Clingy due to illness or injury

Another possible cause is that it has gotten an illness or injury. This could have caused your dog to become clingy because it feels vulnerable. This would be more likely if your dog has started doing it suddenly since showing other signs of being ill or injured such as being fatigued or not moving around as much. In this case, the best option would be to take it to a vet.

Clingy due to wanting something from you

Another possible cause is that your dog is doing it because it wants something from you. This would be more likely if your dog is clingy before it has gotten things such as food and it is not clingy after.

One of the easiest ways to decrease the stress underlying separation anxiety is to make sure your dog gets enough daily exercise. Aim for 2 hours per day, avoiding excessive heat or cold. You can also stay calm to decrease the emotional energy surrounding your arrivals and departures, hire a pet sitter, take your dog to work, or enroll your dog in daycare for dogs. 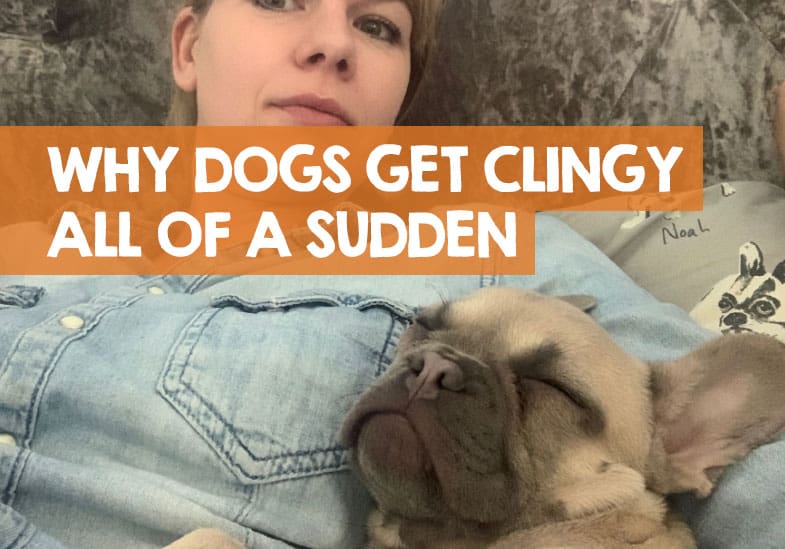 Epilepsy can be caused by many underlying conditions, and there is often no identifiable or predictable trigger of an epileptic seizure. Since seizures can not be prevented, they must be managed, and a clingy dog with any history of seizures should be carefully monitored for any signs of an oncoming episode