Why Is My Dog Gay?

Believe it or not, I’m often asked to render my “expert” opinion on this subject. I have no idea what makes me an authority on this in the minds of some of my clients but — no matter — I try to take this line of questioning in stride.

Funny enough, my gay clients are the ones most likely to comment or query on the subject and I guess that makes sense; it’s not as if they consider the subject taboo or in any way off limits. Yet I’m still never sure what to say when I’m asked if a pet is gay. “I don’t know,” (said with a smile and an amused gleam in my eye) is my best reply. I mean, how am I supposed to know? I’m sure it’s possible, but does it really matter? Is it a medical concern? It’s only an issue if said animal chooses not to mount their selected mate, in which case it still doesn’t really matter; I can just collect male semen by hand and artificially inseminate the female. Done. No gay or straight issue there.

The bottom line? I spend so much of my life trying to convince people to spay and neuter their pets that to venture into the realm of sexual orientation seems like an unreasonable and unnecessary leap into a fruitless and potentially harrowing oblivion.

OK, sure, pets engage in all kind of sexually evocative behavior (i.e., humping) with members of the same sex. Then again, they’re also willing to hump their friends’ heads, the household cat, stuffed hedgehogs and their parents’ legs. Does this make them gay, perverse or deviant? No!

(And I would like to quickly point out here that I am NOT equating “gay” to “perverse” or “deviant.” I am simply offering the latter two as separate and distinct alternatives. You see why I am so reluctant to engage in conversation on this subject? It’s fraught with a plethora of misunderstandings and political pitfalls.)

As to the humping, a personal example: My own (female) dog is a casual “play humper.” I think it’s actually quite cute (though she embarrasses others shamelessly). But how many times can I say it? This is not necessarily sexual behavior. Somehow, for her, it’s socially satisfying and at least for my dog, doesn’t appear sexual at all – but who knows what lurks in the canine mind? Maybe it is get over the issue of his or her sexuality. You’ll never fathom the mind of a dog anyway.

Why are people so bothered about animals being gay or not?

Animal sexuality is about a lot more than animal sexuality. Many, though not all, homophobes claim that human homosexuality or bisexuality is “against nature” but the fact that the animal kingdom is full of what looks like homosexual and bisexual behaviour seems to fly in the face of that.

Sometimes, it all gets a little silly. Back in 2014, a youth member of the far-right British political party the BNP Jack Renshaw complained on Facebook about his dog “licking the penises of other male dogs”.

A less chucklesome approach to a “gay dog” happened in Tennesse in 2013, when a dog was taken to an overcrowded kennel and condemned to death after his owner decided his hunching over another male dog meant he was homosexual.

Are there other gay animals?

Hundreds of species of animals, including dogs, have been observed “exhibiting homosexual behaviour”. As well as same-sex parenting (penguins are famous for it), affection (in polar bears), courtship and pair bonding, that also includes sexual behaviour, including mating games, sexual display behaviour, genital stimulation and full-on copulation.

Indeed, back in 2006, the Natural History Museum in Oslo hosted Against Nature? the first-ever museum exhibition dedicated to gay animals, claiming that same-sex behaviours had been observed in 1,500 different species.

That includes everything from dolphins and penguins to giraffes and chimpanzees.

Why Does My Dog Hump Other Dogs?

To humans, humping in public is considered a big no-no. So when our dogs start mounting each other in public, it can cause us to feel embarrassed and confused about why our beloved fur babies are engaging in such uncouth behavior. 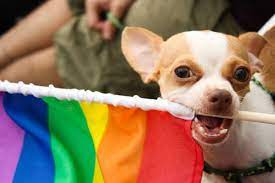 For dogs, mounting can be done for a variety of reasons. While it can be sexual, dogs have their own social norms that are different than those of their human friends! Through different types of play and body language, dogs use non-verbal actions to communicate.  Here are several reasons your dog may be humping other dogs:

Given the many varied reasons that dogs hump one another, the fundamental differences between the brains of humans and those of dogs, and the different ways we view pair bonding, it is important to avoid drawing conclusions about their motivations – particularly when it involves such nebulous concepts as sexual identity.