Why Is My Dog Huffing And Puffing?

Their furry best friend is happy and healthy is what matters most to (probably) every dog owner. In fact, many people treat their pets almost as they were their children. That’s not always a good thing, however. Even the slightest change in their dog’s behavior can make those kinds of fur parents worry too much.

So, does your dog seem perfectly fine during the day, but at night it suddenly starts huffing and puffing? Mine too! But don’t worry; that doesn’t necessarily mean there is cause for alarm.

While some dog breeds are more prone to frequent huffing and puffing due to their small stature and flat face, others do it only occasionally and for a more specific reason. So, without further ado, here are the 4 most common causes a dog huffs and puffs at night:

Dogs spend half of the day sleeping, but they generally prefer to sleep when their owners do so as well. And yes, just like many other animals and people, dogs can dream too. And not only do they dream, but they also have nightmares as well. You probably noticed that your dog often twitches and moves a lot while sleeping. That is probably when the huffing and puffing starts.

Naturally, you would like to wake the dog up and comfort it, just like your parents did with you when you were a child. But we all know that waking up from a nightmare can be a frightening experience. If you think that your dog might have an aggressive reaction upon waking up, it’s best to leave it alone, difficult as it may be. If your dog is unpredictable, the best thing you can do is to simply wait for it to wake up and then comfort it.

Although most of the reasons a dog huffs and puffs at night are not alarming and are completely normal for every canine, sometimes they may indicate a more serious medical issue. Of course, in such cases, your dog would probably be showing other symptoms, not just huffs and puffs. However, even if you haven’t noticed anything unusual, a little extra caution wouldn’t hurt! If you have any concerns about your dog’s behavior, you should take it to the vet as soon as possible.

On the other hand, if a dog’s puffing is followed by trembling, visibly dilated pupils, fear, and searching for comfort or help, you should be alarmed. Dogs can predict various kinds of health issues including seizures both in humans and in themselves. So, a dog that’s huffing and puffing may be trying to warn you that it’s sensing a seizure coming. 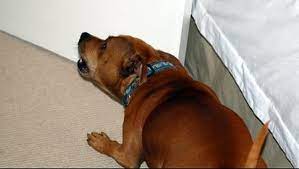 If you think that may be the case, make sure that there are no sharp or fragile objects around your dog so it can’t hurt itself or break something. Talk to it softly and comfort it while gently patting it. When the seizure is over, take your pet to the vet immediately.

Another possible health issue followed by huffing and puffing is the so-called reverse sneezing. It is more similar to a forceful sucking of air through the nose than to huffing, but it sounds the same. It is sudden, rapid, and sounds like a dog is having difficulties inhaling a sneeze.

Generally, this issue is not that serious in comparison to seizures. It can be caused by anything that can irritate the throat, including food, water, or inflammation and allergies. However, consulting with your vet is always the best option in such cases.

Why do dogs puff or huff?

When a dog exhales rapidly this makes his cheeks puff out and it’s often associated with a distinctive sound. Maybe you aren’t even looking at the dog, but you’ll sense that he makes a different breathing sound.

Puffing should not be confused with huffing, which is when the dog is growling or barking at low intensity and puffing his cheeks while he does that.

To understand why your pet is puffing his cheeks, you’ll need to pay attention to the context. In most cases, puffing his cheeks is a way for your dog to relieve stress. One random episode might not be enough to establish the cause, but when he does that repeatedly and a pattern emerges, you can identify what’s making your dog feel anxious.

There can be various situations, like walking down a street where a rival canine lives or maybe it’s the sound of the washing machine that’s bothering him.

If that is the case, you can easily put a stop to the puffing thing by removing the stress trigger. Change your walking route or take the dog outside when your partner is doing the laundry.

When your dog is making more of a huffing sound than puffing, you should take that as a warning sign, as it might indicate the dog is about to become aggressive. Most often you’ll see your dog huffing and puffing at another dog. In many cases, the other dog responds in kind.

That’s bad, very bad, and should take your pet out of that situation before it escalates. 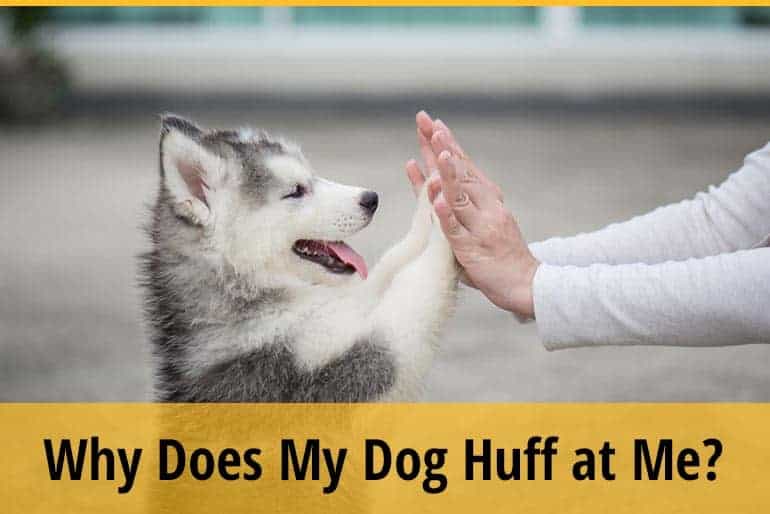 You might also see your dog huffing at you or maybe your children, and this might come as a shock. If it’s your kid that your dog is looking at, get the child out of the room immediately as the dog is ready to attack. The hard part is figuring out why?

In this case, the huffing and puffing are often associated with sneezing or choking sounds. The first thing you need to do is to examine the dog’s airways and look for an obstruction. If there’s something lodged in his throat you should try to remove it manually or, failing that, to perform the Heimlich maneuver.

Dogs have powerful senses, and they react to some external stimuli that we humans often can’t detect. So, if your dog huffs and puffs at night occasionally, you probably don’t have to worry. As long as your fluffy friend is happy, playful and acts normal during the day, there is no reason for concern! Of course, if you have any concerns regarding your dog’s health, it’s always a good idea to consult with your vet.