Why Is My Dog Licking My Feet?

Have you ever wondered: why does my dog lick my feet? For some owners, this behavior may seem odd. And for those with ticklish feet, it can be downright unpleasant, especially if your pup’s licking becomes a regular occurrence. But licking is a perfectly normal behavior for dogs. They lick to communicate and to take in their surroundings.

Your dog has an additional sensory organ, called the Jacobson’s organ, which connects his nasal cavity to the roof of his mouth. This organ allows him to taste and smell at the same time, so he’s able to take in even more information. 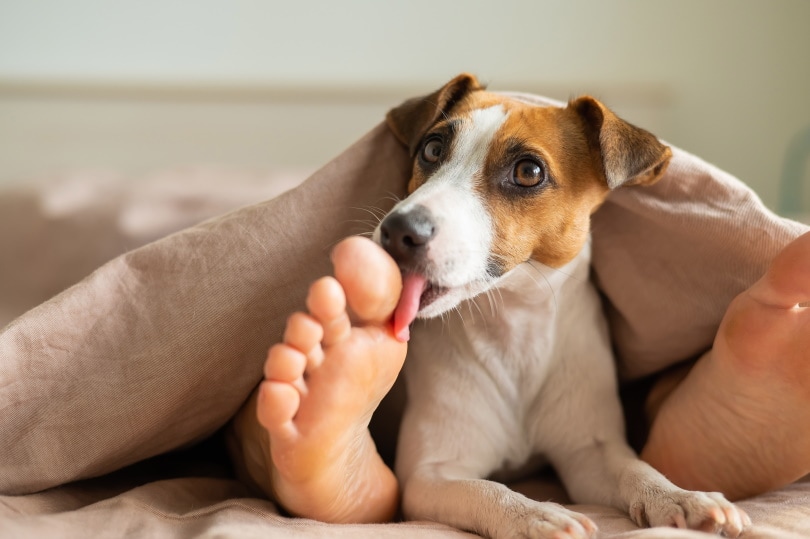 Bitches lick their pups to communicate affection and to provide necessary care. Licking can also be used to express a wider range of emotions in dogs, including submission and anxiety. For some dogs, licking even takes on a compulsive nature. Excessive licking is a bit like biting your nails and can be very irritating for owners.

How to Stop Your Dog From Licking Your Feet

You shouldn’t punish your dog for this behavior, even if it makes you uncomfortable. Instead, use positive reinforcement training techniques to distract your dog from licking. Truly determined lickers may require more drastic measures. You can always consult your veterinarian or a trainer to develop a strategy to deter licking in the future.

So, why does my dog lick my feet? Possible reasons why your dog licks your feet are that the behavior gets rewarded, it is looking for attention, boredom, it is grooming you or that it is being affectionate.

Since there are multiple possible reasons why your dog might be licking your feet, it would help to consider what would make each of them more likely. Once you have a good idea of the cause, it should become easier to get your dog to stop doing it.

While it’s perfectly natural for your dog to be interested in your feet, if he’s licking his paws incessantly, there may be an underlying medical cause. AKC’s Chief Veterinary Officer Dr. Jerry Klein says that if your canine companion is licking only one paw, look for cuts or abrasions (or even an insect bite). While licking is an instinctual way for dogs to tend to their wounds, it can be counterproductive and cause secondary infection and inflammation.

If your pup is licking multiple paws, examine each one, especially between the toes. Dr. Klein says that if the area between the paws is red, swollen, and/or inflamed, your dog may have come into contact with a caustic material, such as fertilizer. Excessive licking could also be due to allergies, including food allergies, or parasites, and warrants a trip to the veterinarian.

Why your dog licks your feet 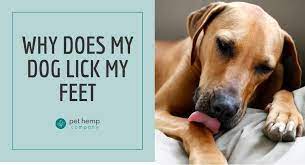 Below are a number of reasons why your dog might have been doing it and what would make them more likely to be the main reason.

The behavior gets rewarded

Instead, it would help to reward it while it is not licking your feet and to stop giving it rewards as soon as it starts trying to lick you.

The cause could also be that it has been looking for extra attention. This would be more likely if it does it more when you have not been giving it much attention, for a while, and if you tend to give it extra attention when it does it.

It could be the case that it is bored and looking for ways to stimulate itself. This would be more likely if it tends to do it more before getting exercise. It would help to ensure that it is able to get the daily amount of recommended exercise for its age and breed. If it is already getting a lot of exercise, another way to stimulate it would be to give it training.

When dogs are young, one of the first ways that they will explore the world is by licking and sniffing things. If your dog is a puppy then it is likely to be the case that it is exploring when it is licking your feet. The habit of licking things will stay with it as it gets older which is why they will naturally lick quite often.

It might also be the case that it does it because it is being affectionate. When it’s licking you it’s letting you know that it trusts you and that you are a part of its tribe. This type of licking is normal and will often happen when you try to pet it.

Dogs will often groom themselves by licking. They will also groom others such as when a mother dog licks her puppies. This could be why your dog has been licking your feet. This would be more likely if it tries to lick you when you are not petting it. 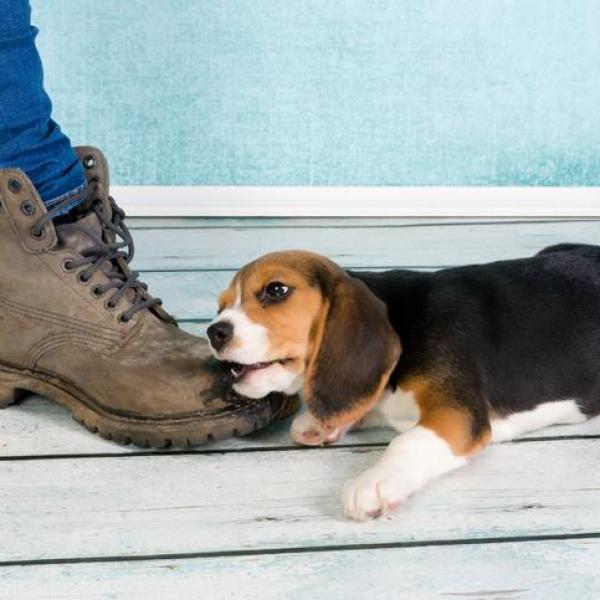 The reason why it licks your feet could be that it is excited. This would be more likely if it tends to do it in situations where it gets very excited such as when you come home or when it is going out for a walk.

In this case, it would help to avoid doing the thing that it gets excited about and to wait for it to stop licking your feet before continuing.

What else happened when your dog first started licking your feet

If your dog did not always lick your feet, it would help to consider if anything else happened when it first started doing it since it could be the case that there was an event that caused it to start.

If it started doing it suddenly, it could be due to things such as learning that it gets rewards for doing it or if you stopped giving it as much attention causing it to do things to get you to give it more attention.