Why Is My Dog Licking My Hand?

What’s better than coming home to a kiss from a happy pup? Most dog owners interpret licks from their dogs as a sign of affection. In other words, the closest your canine companion can get to kissing. But is this accurate? And what can you do if your dog’s licking is out of control? Is Licking a Dog’s Way Of Kissing?

The jury is out on what a dog’s licking actually means. Believe it or not, what you interpret as affection might, in fact, be your dog encouraging you to throw up your lunch for them.

“Researchers of wild canids — wolves, coyotes, foxes, and other wild dogs — report that puppies lick the face and muzzle of their mother when she returns from a hunt to her den — in order to get her to regurgitate for them,” notes Alexandra Horowitz, head of the Horowitz Dog Cognition Lab at Barnard College and author of the book Inside Of A Dog: What Dogs See, Smell, and Know.

Similarly, your dog could simply think that you taste nice. Certified applied animal behaviorist Dr. Mary Burch points out that humans have slightly salty skin, especially after sweating during exercise. Therefore, those licks might be more about seeking salt than giving affection. Horowitz adds that if your dog likes to lick your face, it will often happen after you’ve finished a delicious meal. Or, well, any meal.

But, there is also evidence that licking is sometimes a sign of affection. Horowitz points out that, although it started as a food-seeking behavior, licking has now become a ritualized greeting for many dogs. Some wild species in the dog family will lick pack members just to welcome them home. So, those daily slobbers really might just be a sign that your dog is happy to see you.

“Licking can be a sign of affection,” explains Dr. Burch. “It might also give a dog a feeling of security and comfort, just as the dog had when licked by its mother in the litter.”

When Is Licking a Problem?

Most licking is harmless, even welcome as a form of self-expression on the dog’s part. Burch notes that there’s no need to worry that it’s a form of domination — in fact, it’s quite the opposite.

“One theory is that licking is a sign of submission,” she says. “The idea is that dogs who are submissive will lick a more dominant member of the pack.” Even so, there are some scenarios when you might want to head off a slobber fest from your pup. The first relates to human comfort, that is, some people simply don’t like being licked. If you have a germaphobe friend who cringes every time your dog approaches, it’s kinder to dog and friend alike to redirect the behavior.

But sometimes licking is a symptom of a more serious problem. If your dog is licking themselves, you, or objects excessively, to the point that it seems like a self-stimulatory behavior, this might be a sign of anxiety, boredom, or pain. Obsessive self-licking can also be a sign of allergies or other health problems.

What Can Dog Owners Do About Problem Licking?

If your dog is self-licking excessively, start by having your veterinarian check them out and address any medical problems or discomfort. Once you’ve ruled out medical explanations, you can turn to behavioral solutions.

One idea is to redirect your dog,” says Dr. Burch. “When they lick, switch up the activity. A good option is to choose a behavior that is incompatible with licking, such as using an interactive puzzle to get a treat. You can also have the dog engage in other behaviors such as ball play or trick training.

By repeating this redirect, you’ll gradually reinforce the lesson that you don’t want your dog to lick, without ever using negative reinforcement.

Trick training, in particular, is a good way to turn a repeated undesirable behavior into an opportunity for positive reinforcement. Start by simply having the dog sit, which might stop the licking on its own, then reward the behavior with a treat. Next, why not harness your dog’s affection by teaching them to give you a hug? Or to speak on cue? Other tricks to practice could include sitting up, army crawling, or leg weaving. If you and your dog find you really enjoy trick training, you could even look into Trick Dog trials.

Things to consider about your dog licking your hands

Below are some things to consider when figuring out the main reason why your dog has been doing it.

What else happened when your dog first started licking your hands

If your dog did not always lick your hands, it would help to consider what else happened when it first started doing it. If it started doing it suddenly, it could be due to things such as learning that it gets rewards for doing it or if you stopped giving it as much attention causing it to do things to get you to give it more attention.

What is different when your dog licks your hands

It would also help to consider the timing of when it licks your hands. If it tends to do it more when you arrive home, it would be more likely to be due to things such as excitement and it would help to ignore it until it stops licking and then to reward it for not licking.

Why Does My Dog Keep Licking My Hands?

Let’s kick off by acknowledging that licking comes naturally to dogs. If you watch any pack of wild dogs, they will greet each other with whines, growls, panting, and a lot of licking. So, part of the reason your dog licks your hand is that you are part of the pack! 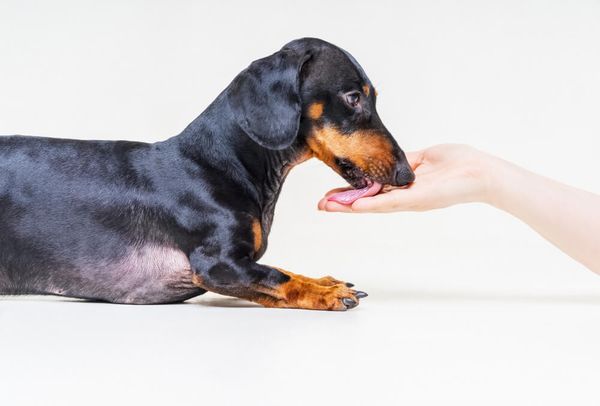 From a human perspective, we see the dog as family members. We tend to treat them as if they are human. However, they are still animals and will display animal behavior.

Their paws are not as versatile as human arms and hands, so their mouths play a much greater role in understanding the world around them. We also have the advantage of speech, which they do not. So, once again, they use body language, as well as their tongues, to communicate with us.

What’s the first thing most people do when they meet a dog for the first time? They extend a hand for the dog to sniff. It signals our intention that we are harmless and gives the dog time to take in our scent and make a judgment as to whether it trusts us or not. You usually know if the dog has accepted you because it starts to lick your hand.

It’s a universally accepted sign of the extraordinary bond between humans and dogs, a relationship that stretches back for thousands of years.