Why Is My Dog Licking The Couch?

Dogs don’t have hands, so their mouths are used quite a bit in their day to day lives. You’ve seen your dog consume some of the grossest things in existence, but they also use their mouths to explore their environment. Dogs don’t have the most fine tuned taste buds (which is why they eat almost anything), so they use their tongue in combination with their smell to explore their surroundings. 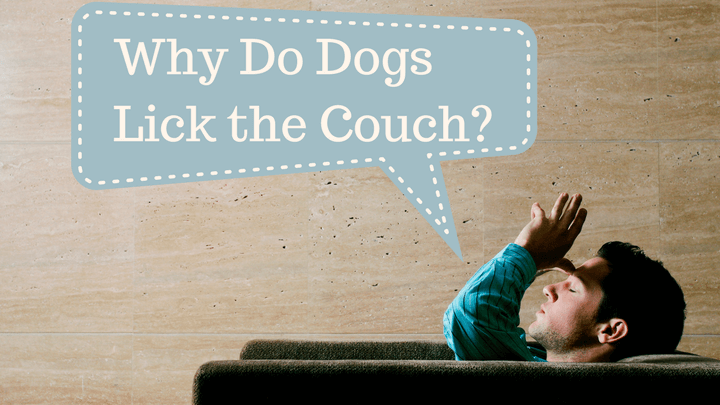 So, why does my dog lick the couch? Possible reasons why your dog licks the couch are that it is anxious, it likes the taste, there is food stuck to the couch, it smells your scent on there or that it is a compulsive behavior.
Since there are a number of reasons why your dog might have been licking the couch, it would help to consider what would make each of them more likely. Once you have a good idea of the most likely cause, it should become easier to get your dog to stop doing it.

Compulsive Behavior – The Cause of Couch Licking

This is the number one cause of couch licking. Some dogs are predisposed to compulsive behavior, and it manifests as severe licking. They may lick their paws, other dogs in the house, or any objects they happen to think taste good or feel good on their tongues.

Humans with obsessive compulsive disorder manifest their symptoms with behaviors like obsessive organization, counting, fears, and strict routines. Dogs don’t exactly exhibit compulsion like humans do, but their manifestations are still compulsive, extended, and frequent abnormal variations of normal behaviors.

Licking is a very common manifestation with dogs suffering from compulsion. Licking in itself isn’t abnormal in dogs but when they start licking something obsessively or in situations where you’d consider it abnormal, then it’s time to consider your dog might have a compulsion problem.

How Do You Stop the Couch Licking?

There are two steps to treating compulsive behaviors. You should always start with a veterinary visit. Sometimes the stress can be coming from physical pain or another kind of medical problem, so it’s best to just rule out anything medical to begin with.

Another benefit to a medical visit is you can possibly get your dog started on medications that help with anxiety and compulsion.

If there aren’t any medical issues that are making your dog lick compulsively, then your dog needs behavior modification. This can be done with or without a trainer; how bad the licking is will dictate whether you need a trainer or can do it on your own. Redirecting their anxiety to something more productive and normal like exercise is an ideal treatment.

You’ll eventually notice your dog’s anxiety cues, and you can head off a full blown anxiety spiral if you recognize these cues and stimulate your dog’s brain in other ways. Sometimes a slight increase in activity and socialization is enough to reduce your dog’s stress and help discontinue their stress behaviors because their mind is stimulated.

Couch licking seems benign to start with, but eventually, your dog might start licking things that create other problems. A lot of compulsive dogs end up licking themselves until they develop bald patches, hot spots, and skin infections. When your dog starts exhibiting compulsive licking behavior, nip it in the bud as quickly as possible to keep your dog from developing a lot of hard-to-break habits.

What else happened when your dog first started licking the couch

If your dog did not always lick the couch, it would help to consider what else happened when it first started doing it since it might be the case that there was an event that caused it to start.
If it started doing it suddenly, it could be due to things such as if you started leaving it for longer periods causing it to get anxious, food or drink getting stuck to the couch or it might have learned that it gets rewarded for doing it. 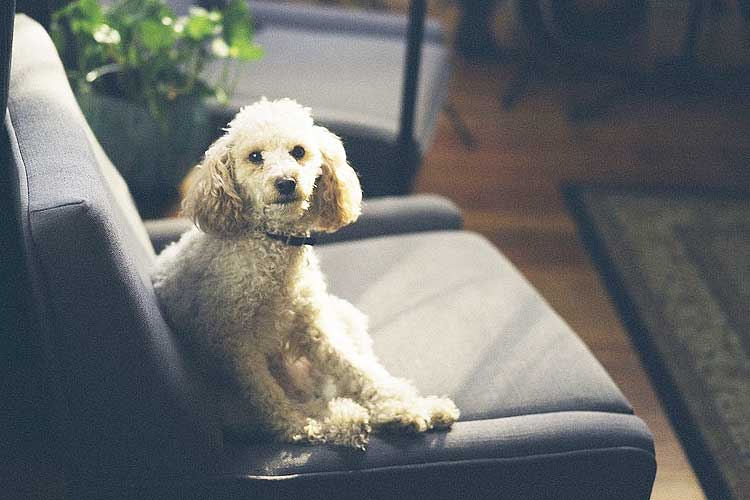 If your dog licks the couch all the time, it could be because it likes the taste of the couch, it has anxiety or because of a compulsive behavior. In this case, it would likely help to take it for a checkup.

Why has my dog suddenly started licking the couch?

If your dog has suddenly started to lick the couch, it could be due to things such as a change in your dog’s diet that has resulted in a nutritional deficiency, someone left food or drink on the couch or something has been causing your dog to be anxious. It would help to consider what else happened recently that might have changed your dog’s behavior.

Why does my dog lick the couch after drinking water?

If your dog licks the couch after drinking water, it could just be the case that your dog likes the way the couch tastes more when its tongue is wet. However, it could also be a sign that there is a nutritional deficiency and it would help to talk to your vet about it when you next see them.

Why does my dog lick the couch after eating?

If your dog licks the couch after eating, it could be a sign that your dog is still trying to consume nutrients that it is not getting from its diet. This would be more likely if your dog has not been eating food designed for dogs such as regular dog food and has been eating human food instead. However, it might also be due to an illness. It would help to ask your vet about it when you next see them.

As you can see, there are many reasons why your dog might be licking the couch. It might smell like you, or there might be some hidden flavor within the threads of your furniture. Perhaps your dog has an underlying medical condition, or maybe it has just formed a bad habit. Whatever the reason, there are many ways to remedy the behavior. Do your best to determine the root cause of the licking. Then, you can start thinking about how to treat it. If you get stuck, simply call a professional. Depending on your problem, you might try a vet or a dog trainer. Hopefully, armed with these tips, you’ll be able to put an end to your dog’s licking and have a dry cough once more.