Why Is My Dog Scared All Of A Sudden?

Dogs act paranoid all of a sudden due to underlying fear, phobia, separation anxiety, or physical health issues. Although the complexity of a paranoid dog hasn’t been thoroughly analyzed, it’s a fact that some canines suffer from this. 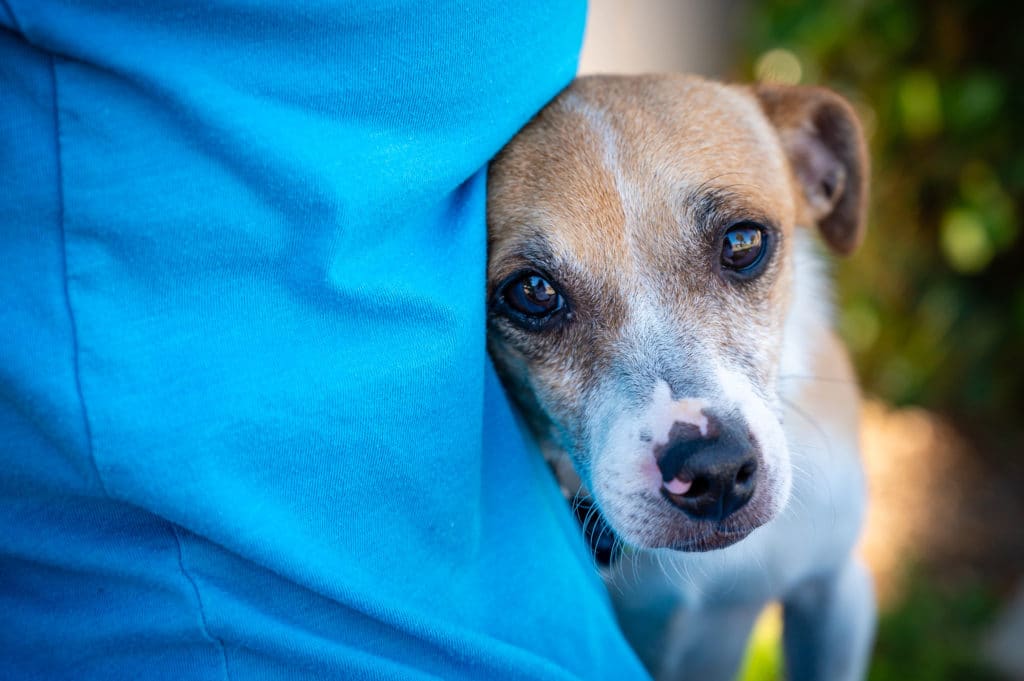 Fear as a defense mechanism is widely spread among dogs and it’s not that easy to eliminate.

What can make a dog act paranoid? Dogs with phobia experienced persistent fear and now they constantly anticipate it even when the trigger isn’t apparent.

Persistency isn’t a hard and fast rule. Even a single fearful experience can turn into a phobia that surpasses rational responses. Both fear and phobia can make a dog paranoid, though with phobia the symptoms are much more expressed. So many triggers can be responsible for the condition but I’ll try to guide you through them all.

Why is My Dog Anxious All of a Sudden?

Many medical and non-medical reasons cause sudden anxiety in dogs. Dogs can get unsettled due to stuff that seems mundane to us. No age, gender, or breed is excluded from this.

Let’s look at the most common reasons for a dog’s mental distress with paranoid behavior as a resulting outcome.

A dog that is afraid is a dog that often starts acting paranoid. Most commonly dogs fear sudden loud noises, objects/people that look suspicious, unpleasant smells, etc. Fear appears when the trigger is in the dog’s proximity.

Different dogs show different symptoms of fear. Some hide in dark and isolated places while others become alert and aggressive. If you know your pet well enough you might have an idea of what produces the sudden onset of fear. When you can’t find the exact cause right away, don’t blame yourself.

It’s advisable to talk to a veterinarian and even take your pup for an exam. A vet along with a canine trainer can guide you in relieving the level of fear and stress in your beloved furry friend.

Although age isn’t the key factor, most dogs develop phobia as a result of a traumatic experience when they’re puppies or between 1 and 3 years of age.

Anxiety crosses the line and turns to phobia due to incidents like mistreatment, abandonment, abuse, etc. Phobic dogs make it hard for themselves even when the trigger for the phobia is nowhere to be seen or heard.

Whatever the cause is, this type of anxiety takes a great toll on your dog’s physical and mental health.

The first few months of a puppy’s life are very important for proper social and environmental experiences.

Letting this key segment slip can make a puppy habitually fearful as he grows up. One of the most common culprits of an anxious dog is poor socialization.

Various stimuli during young age give a dog the general idea that the world is filled with surprises that can be loud, sudden, and weird looking but cannot hurt him.

Puppy classes and walks in parks or around the city are a great way to avoid these problems. Social paranoia in dogs can also be caused by early separating a puppy from the mother and other littermates. This happens when you take the dog away before he reaches 8 weeks of age.

Luckily, more and more people rely mainly on positive reinforcement as means to train their dogs unlike the old methods of using physical punishment and violence for bad doggy behavior.

Punishing the dog’s normal puppy behavior like accidents inside the house can produce all sorts of phobias in the long run and the only product of the process is a paranoid dog.

What to Do If Your Dog is Acting Weird and Restless?

If your dog starts acting weird and restless you first need to make sure he doesn’t hurt himself on sharp objects, the stairs, etc. In the meantime, do a little brainstorming to try and figure out the potential cause and any coincidences.

If you are still not able to find what the cause is, take your dog to the vet asap. You can sometimes spot a dog acting like something is crawling on him as a response to boredom, so not all weird behaviors are as serious as one might think.

Why is my dog acting sad and scared?

Fear: Your dog may have a fear or phobia that makes him seem depressed. Dogs sometimes show fear in different ways than you would expect. Your dog may be trying not to appear scared since that might make him more vulnerable. Instead, he just retreats from normal activities to protect himself.

How do you calm down an anxious dog?

Exercise Your Dog. If your dog has separation anxiety, the obvious way to ease their mind is to never leave them alone.

What does it mean when your dog suddenly won’t leave your side?

Separation Anxiety Can Cause Your Dog to Not Leave Your Side Some dogs even try to prevent you from leaving. Dogs with separation anxiety will sometimes start barking, pacing or exhibiting other distressing behaviors after a short time after being left alone.

How do you tell if your dog is depressed?

Depressed dogs will often lick or chew their paws to soothe themselves. If your dog suddenly loses interest in playing, going for walks, and other things that would normally excite her, take note. Dogs who become less active, slow down, or seem to lose purpose may be suffering from dog depression.

Why is my dog acting weird and following me around?

Dogs will often follow their humans around because they receive attention or some other form of reward in return for this behavior. If following their pet parent around leads to treats, play time, or pets, dogs will remember and perform the behavior more frequently. Most people will find this behavior endearing.

Why is my dog acting weird and clingy?