Even though you might have heard or been led to believe that birds don’t utilize feeders in the winter, the opposite is true.

In the winter, when temperatures dip low enough to bring snow and, more crucially, frost, it’s necessary to utilize feeders to protect the birds’ food from the elements. Due to the accumulation of snow and ice, the natural food sources for birds are unable to be accessed. In times like these, the birds in your backyard rely on you to keep the feeders stocked with food. 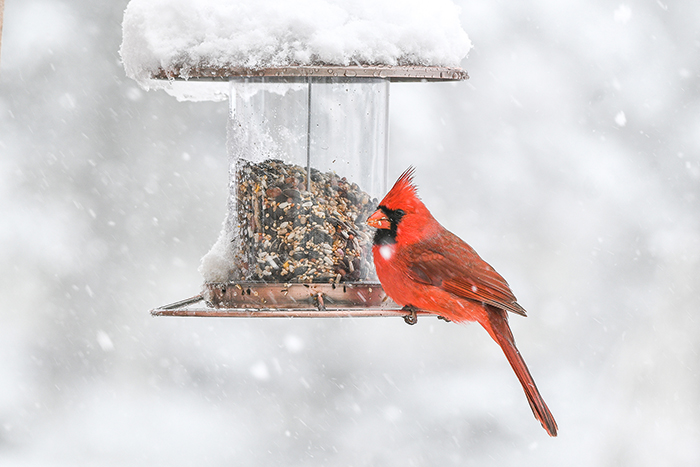 Word on the street is that birds get dependent on the food supplied to them at feeders, so it’s important to keep them filled every day of the year.

Since the birds in your yard come there because they know they will be fed round-the-clock, you shouldn’t take down the feeders in the middle of the night.

In the winter, when snow and ice cover the insects, spiders, and fruits that wild birds normally eat, they must rely on feeders to supplement their diet.

The birds will visit your feeders to replenish the extra fat they burn while foraging for food they can’t find in the wild.

As a result of how rapidly the food is used, it is your responsibility to refill the bird feeders twice a day. This would be done in between intervals of tending to the feeders, either by clearing snow from them or by shaking them to prevent them from freezing solid.

Prepare for the coming of the harsh winter months by stocking up on high-energy, fatty bird food, such as suet cakes or fat balls, as this is a major problem for birds.

Feeders must be used in winter

Winter is a time when bird feeders, which backyard birds continue to rely on, should be used.

Winter is a perfectly acceptable time to utilize a feeder.

It’s possible you’ve heard that feeders shouldn’t be used in the winter because of the risk of frost or snow damage, but you shouldn’t let that stop you.

And because of their sturdy construction, bird feeders can withstand any climate. It can be harmful to the wild birds if you worry more about the feeders breaking than they do.

As in the fall, when temperatures dropped to freezing, birds need access to bird feeders from December through February.

Peanut feeders can be removed if desired, but seed feeders are mandatory.

Instead of seed, suet feeders should be stocked throughout the winter to provide the high-energy meal the birds require to restore their bodies’ fat stores. It’s no exaggeration to say that states that get snow, whether for a long or short length of time, or even just a period of frost, really need to stock up on bird feeders.

For periods of two to three weeks, a heavy snowfall can cover the ground, obscuring the natural food source for a variety of birds.

Birds have a tougher time finding food when it snows because insects, bugs, and spiders die out or become harder to forage for.

As a result, food scarcity is likely, as these feeders would be used to attract even more birds than usual.

However, even when food is provided in bird feeders, a deficit may still remain.

The food in bird feeders freezes solid, and the birds have nothing to eat because there is nothing available in the wild or in people’s backyards.

Keep in mind that wild birds depend on bird feeders more in the winter than in the spring, summer, or fall because of the difficulty of finding food.

Depending on the species of birds you want to attract to your backyard, you may need to fill the feeder more than once a day.

It’s possible that this doesn’t apply to you if you reside in a warmer part of the United States, but if you get a consistent amount of snow and frost each winter, this is for you.

To make up for the fat they’ve lost, birds up their food intake significantly during the colder months.

Since they are out and about foraging all day, you should expect your feeders to be soon depleted.

Although you may see birds in your yard as early as dawn, it may be midmorning before they’ve eaten half of the seed in the feeder. It might be less noticeable with numerous feeders, but it would become clear with just one.

Now it’s your turn to watch for a break in the birds’ eating frenzy so you can bring in fresh seed.

No matter what time of day it is, as long as the feeders are still full, you can do it. However, sometime around lunchtime is ideal. In the spring and summer, when temperatures are mild, only rain is likely to disrupt your bird feeder installation.

Consequently, you may anticipate more time spent in the yard between December and February while attending the feeders, not only to replenish the food used up but also to shake off access snow, if any.

You’d get in the habit of doing this quite quickly, but if it were to snow, you could leave the feeders alone if you wanted to.

Not that it will help the birds much, but a feeder topped with snow can be quite heavy, potentially causing damage to whatever it is hung from.

Unhooking the feeder, tipping or shaking the snow off, and rehanging it is a simple process that shouldn’t be too much of a hassle.

You can now bring the feeders inside for the night to protect them from the more difficult to control frost that is expected in the coming days or weeks. During the day, you may keep the seeds or peanuts from adhering by shaking the feeder.

Winter is when you’re most likely to see an increase in the use of suet, in whatever shape it may come, although I can’t imagine keeping suet cakes or blocks from becoming solid. If possible, switch to suet pellets and only put out a small amount at a time so they don’t freeze.

Summarizing it all up

Feeding birds in the winter is something I look forward to doing, as I’ve had some quite lovely surprises in the wild bird behavior on several occasions.

Never take down bird feeders in the winter; they are just as useful then as they are in the spring and summer.

Birds have a more difficult time finding food during the winter months when there is a period of snow or frost on the ground, as this stony coating keeps their natural food in the ground or high in the trees and flora.

Frost can do this to the food in bird feeders, but at least there’s a chance the birds can get to their food if it snows.

Birds are more prone to suffer from food shortages in the winter, so it’s crucial that you keep their feeders well stocked throughout the next several months.

In the winter, birds need to eat more energy-centric food like suet to replace lost fat, therefore you may need to replenish the bird food twice a day.

Birds may have a tougher time finding food in the wild during the winter, but feeders can also be made more challenging.

It would therefore be necessary to make more regular trips to the feeders in order to shake the bird food loose from the frost, or to tip off the snow that has accumulated on top of the feeders.