Why Are My Parakeets Fighting

Budgies are often thought of as beautiful, lovely, and sociable, yet they do have a darker side: aggression.

Even if your male and female budgies are often peaceful, you may witness them attacking each other on rare occasions.

This may occur for a variety of reasons, including territorial disputes, poor living conditions, or simple incompatibility among the budgies.

If you care about your budgerigar’s well-being and demeanor, you should act quickly to stop their fighting.

Can a Male And Female Budgie Fight? 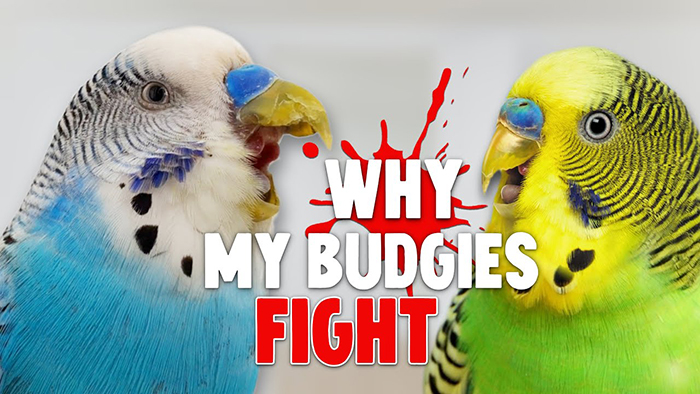 Budgerigars can usually get along well with other little birds like parakeets.

This is usually the case, although you may still witness your budgies fighting.

Biting, chasing, hissing, and becoming overprotective of one’s food and territory are all clear indications that a parakeet is becoming aggressive.

There’s probably an explanation for why your male and female parakeets are fighting.

When paired or joined by other birds, certain species are so dominant that fighting is inevitable.

Long-term fighting is bad for the health of your birds, therefore you should take steps to stop it as soon as possible.

Eventually, your parakeets are going to start attacking you and other birds.

Adding tension and aggression to the mix, this may quickly become a very unpleasant situation for everyone involved.

Why Does My Male Budgie Attack My Female Budgie?

Your male budgie may be attacking your female budgie for one of two reasons:

The first could be related to territorial disputes, and the second could be your male budgie’s attempt to woo your female parakeet.

These motivations could be viewed as inherent avian behaviors.

Territorial disputes among budgerigars are not uncommon.

A male budgie who has claimed a cage as his territory may launch an attack on a female budgie if she moves in.

Therefore, a female budgie should not be introduced to a male parakeet’s cage, as this could result in a battle between the two birds.

If you have a male budgie and desire to bond with a female budgie, you should expect the male to engage in aggressive behavior toward the female in order to gain its attention.

When parakeets are in their mating season, they tend to do this.

Why Are My Budgies Suddenly Fighting? 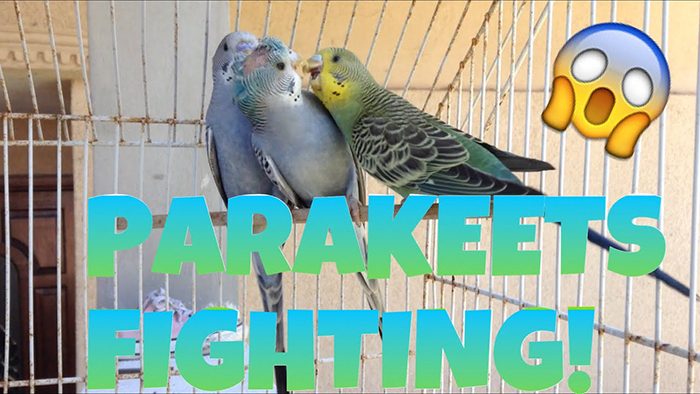 As a budgie parent, you could get worried if your birds start fighting out of the blue.

This is mostly due to your awareness that unchecked fighting poses a threat to the wellbeing of your pets.

Here are a few potential causes for your budgies to start fighting out of the blue:

Territorial impulses can force your usually sociable parakeets to act aggressively toward one another.

Defending their cage from intruders is a natural instinct for budgies.

It can also occur when one parrot is defending its perch or favorite toy against an attack by another parakeet.

As a form of hostility, they may nip, squeak, or chase one another.

Overcrowding a cage with many parakeets increases the likelihood of a major battle breaking out.

Your budgies’ health and happiness would suffer greatly if they were confined in a cage that was too small for their population.

They would start a fight to get out of the cage because there wasn’t enough room for them to move about in it.

This would cause them to become excessively possessive of their belongings and their mates.

More timid birds would suffer as a result of the added stress and health problems.

That’s why you need a spacious enclosure.

Although parakeets tend to get along well with other birds, there is always the chance of a fight breaking out.

Because of the terrible chemistry between your budgies, they will quarrel constantly.

Carefully and cautiously introduce additional budgies to your existing flock so that they can get used to each other.

The best option is to separate the budgies if they continue to fight despite your best attempts.

I can now deduce what you’re thinking.

Can you please tell me how I can prevent my birdies from constantly fighting?

How Do I Stop My Budgies From Fighting?

If you want to keep your parakeets in good health, you should prevent them from fighting.

You can still build a peaceful relationship with your budgies by taking measures to stop them from picking at each other’s feathers.

Separate housing for your parakeets is the greatest solution for dealing with their territorial tendencies.

With their own space, your budgies won’t have to compete with one another for dominance.

Once aggressiveness has subsided, you can try moving the cages of your budgies closer together in order to introduce them.

Have a neutral area

If you already have a parakeet, don’t get another just so they can socialize with each other in their cage.

The other parakeet would see this as an invasion and react defensively, leading to a fight.

Try to keep the playground from becoming too dominated by any one player.

You should still keep an eye out for any signs of trouble, but this is a good strategy for reducing aggression between your parakeets.

In the event that you observe or hear your budgies fighting, a simple “don’t fight” command should be enough to put a stop to the conflict.

Discouragement phrases like “No!” or “Stop!” can keep birds from colliding.

Your parakeets will be able to learn to quit doing that with this method.

You can also try to calm them down thereafter to keep their stress levels down.

While parakeets tend to be sociable birds, they are capable of vicious behavior if provoked.

Incompatibility, territorial needs, and mating impulses are all possible causes of conflict between your male and female budgies.

As territorial birds, your parakeets may fight with one another if confined to a cramped cage.

If you care about your birds’ well-being, you should take immediate action to prevent fights between them, whether that’s by separating them into different cages, creating a neutral play space, or using simple phrases.