Each of us has witnessed a bird enjoying an apple, a fruit, or an insect. But not everyone has witnessed birds eating bees. It’s possible you’ve heard that bees use their stingers to ward off birds. The thought then occurs, do birds eat bees?

To answer your question, there is a subset of birds that specialize in bee consumption. Some birds, known as “bee-eaters,” primarily subsist on honey from bees. Below, we will go over the various bird species that eat bees. 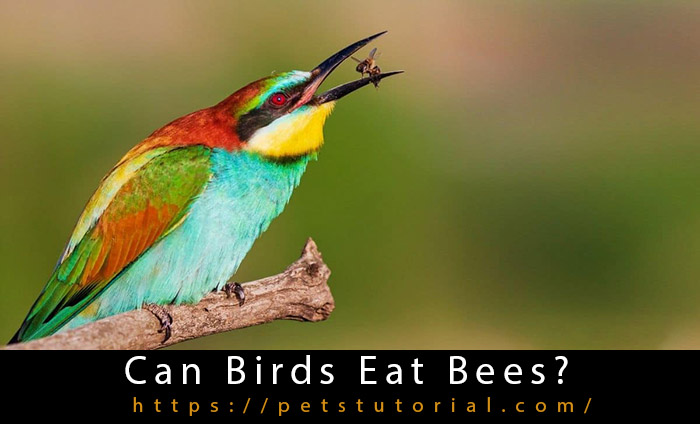 It’s not always the same when it comes to how birds eat. It’s common knowledge that birds eat bugs, but the real mystery is whether or not they enjoy bees.

First, not all birds consume bees, and those that do prefer to include them in their diet.

European bee-eaters are a well-liked avian species due to their fondness for the insect pollinators. Bees are a favorite diet of several well-known bird species.

To put it simply, bees are a fantastic source of proteins for birds at any point of their lives. Bee larvae are a nutritious alternative since they are high in protein, healthy fats, and complex carbs.

How Do Birds Eat Bees?

Skill is required to eat bees, and the vast majority of birds lack the necessary ability.

Skilled birds can digest bees without being harmed by their stingers. There are at least two or three strategies utilized by bee-eating birds that are shared by a wide variety of species.

The bee-eater is a very intelligent predator. They like to perch high up so they can survey their surroundings in detail.

When they locate their prey, they immediately dive for it.They typically attack when insects or bees are perched in a vulnerable position, such as on a rock or other hard surface. If their prey is poisonous, they will immediately kill it.

The stinger and venom sac are removed after the victim has been killed. They are among the most perceptive birds because of the meticulous planning that goes into each hunt.

Depending on the species, these birds have exceptional eyesight and may identify prey from a distance of 250 to 350 feet. 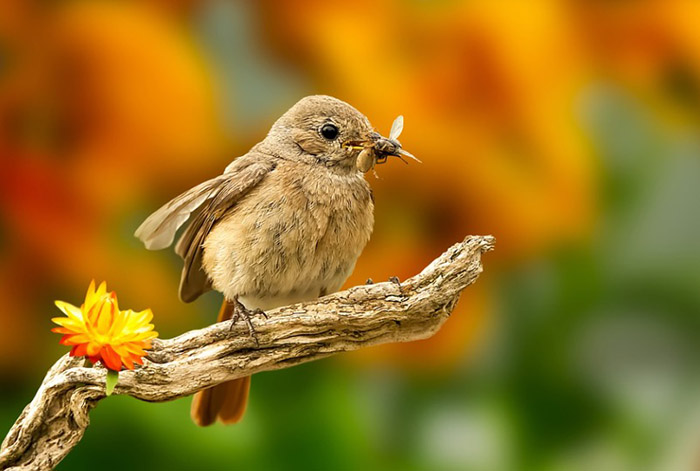 The majority of the world’s population of bee-eating birds lives in Asia, North Africa, and Southern Europe. To aid in their quest to capture bees and other insects, their beaks tend to be relatively lengthy.

There are 27 different species of birds that specialize in eating bees. Some well-known bee-eating birds are listed below.

The ability of these birds to successfully consume bees and wasps has made them extremely famous. Their primary diet consists of other insects in the air, especially bees. Moreover, when hungry, some birds can eat wasps.

Their keen eyesight and vision let them to locate prey from as far away as 250 feet. Their diet consists primarily of insects and bees.

The diet of scarlet tanagers is not normally thought to consist primarily of bees. Scarlet tanagers, like summer tanagers, occasionally catch insects such as bees, wasps, and hornets to eat.

Some birds will occasionally indulge in a snack of bees or insects. See below for a rundown of these avian species. 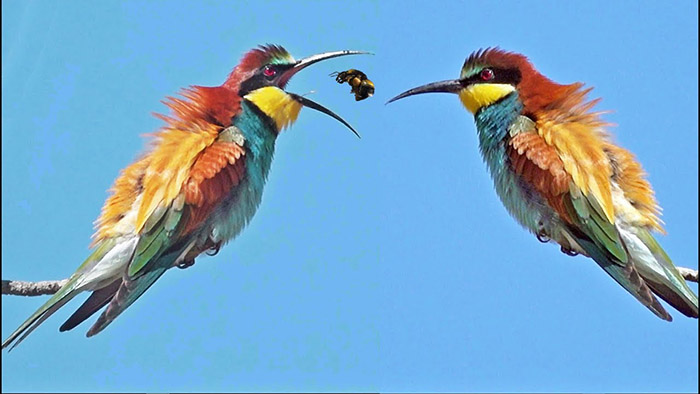 The honey bee is a social insect, and so are carpenter birds. This can lead you to believe that birds are capable of successfully hunting carpenter bees.

Not all birds are fond of them, though. Some species of bee-eaters, including those from Europe and Australia as well as the Mediterranean region, eat carpenter bees. Carpenter birds are occasionally eaten by scarlet tanagers, woodpeckers, shrikes, and bee-eaters.

Honey bees are a favorite among bee-eating birds, thus the answer to your question is yes. Many species of birds, including summer tanagers, the greater honeyguide, and honey buzzards, prey on honey bees.

There are some species of this bird that enjoy snacking on honey bee larvae. Many bird species avoid honey bees because they are not an easy meal.

Birds are well-known for being omnivorous, non-predatory eaters. However, certain birds have gained notoriety for their propensity to feed upon and devour bees.

The birds that devour bees are sometimes the victims of the bees themselves. To avoid being eaten by birds, bees will defend themselves by stinging those that get too close.

Because the bees are only acting in self-defense, their attacks can occasionally be fatal for the birds they are trying to defend. Honey bees are better able to defend themselves from predators like birds.

They rarely sting birds until they feel threatened, and then they can kill them in just a few minutes with their venom.

Birds that eat insects avoid live bees and instead target those that are either dead or unable to sting.

You may have observed one of the birds mentioned above in your birdwatching travels. As a result of the dangers involved, most birds avoid eating bees. However, certain birds have gained notoriety for their propensity to consume bees.

Some common birds that would happily consume bees are bee-eaters, summer tanagers, honey buzzards, and the greater honeyguide. Insects and bees make up over half of a bee-diet. eater’s