As with other birds, owls are fiercely protective of their territories, young, and partners.

On the other hand, owls do not share the same capacity for fear as other animals.

That means they are not easily fazed by the much larger stature of their opponents.

Consequently, the issue of whether or not owls will attack humans has been settled.

If an owl considers a human to be a threat to its young, mate, or hunting region, it will almost likely attack the person.

However, it’s not easy for most people to wrap their heads around the idea that owls can be harmful. 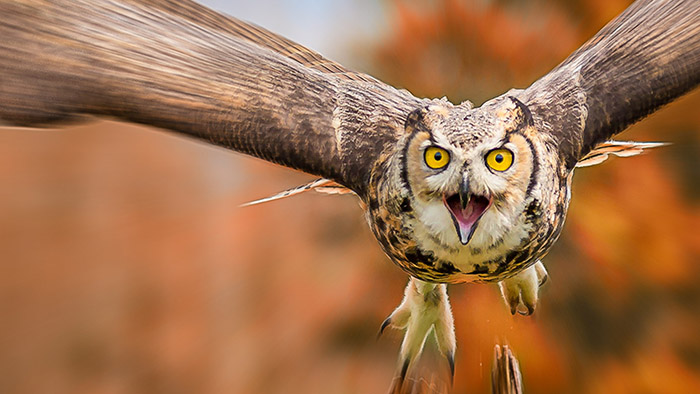 Because owls have round faces and eyes that can easily fit a human’s. For this reason, most people view owls as friendly and approachable, perhaps because their faces are so similar to those of young humans.

I put the blame on Youtube, where one can find countless videos of adorable owls and owlets.

All Potter fans want their own own Snowy Hedwig, and this has increased the popularity of owls as pets around the world.

A question remains, though, and that is prompted by this bias:

Are Owls Friendly To Humans?

In most cases, no.

However, with the right upbringing, they can become peaceful pets.

In reality, an owl’s talons can reach a length of 3 to 4 inches, making them capable of causing severe wounds.

Also, they can see clearly in the dark thanks to their large, human-sized eyes.

Their ears sit on top of their heads at various levels, one pair on either side of their eyes.

Because of this, owls can pinpoint the exact location of a moving object with great accuracy.

Owls can pinpoint their prey’s whereabouts no matter the time or day.

Even though owls lack the large, fully formed brains of primates, their nerve cells are optimally designed for enhanced perception and hunting.

The serrations on their feathers let them fly silently.

Many people liken owls to “avian silent killers,” and the comparison is not far off.

Not surprisingly, most adult owls kept as pets by humans will not tolerate being stroked.

A human being needs a legal permit and specific training to accomplish such a feat.

However, captive-reared owlets typically develop a unique attachment with their human caretakers.

Do Owls Attack Humans At Night?

They do this, albeit their attacks aren’t restricted to the dark of night.

Because of their excellent night vision, owls are strictly nocturnal predators.

After all, owl eyes are optimized for nighttime vision.

Light is magnified on their reflective retina.

There are more rod cells than cone cells in an owl’s eye.

Even though they can’t see colors, owls are able to concentrate more light than most other creatures.

What this means is that owls have excellent night vision.

Even while owls have excellent night vision, that doesn’t imply they can’t see in the daytime, too.

Or, to put it another way, owls are able to see and be active day or night.

No matter how dark you make your room, the sun is still too bright for owl eyes.

During the day, owls either nap or squint their eyes to block out the light.

In general, owls don’t begin hunting until far after dark and don’t stop till the morning light.

This allows the owls to swoop down and pick out any of their prey that is either returning to or leaving its nest at dawn.

Currently, owls only attack humans when they see them as a threat to their life or dominance, similar to the behavior of most other animal species.

These misunderstandings usually occur when humans, while out hiking or jogging, wander into owl territory.

When compared to attacks at night, daytime is when the majority of owls target humans.

Nighttime contacts between humans and owls, on the other hand, are frequently associated with roads, as the owls travel along these areas in search of fresh road-kills.

Sadly, such owls are frequently involved in car accidents because they are blinded by the lights of passing vehicles.

Which leads to the demise of owls.

You may be asking, given that most owl attacks on people occur during daylight hours:

How Do You Know If An Owl Will Attack You? 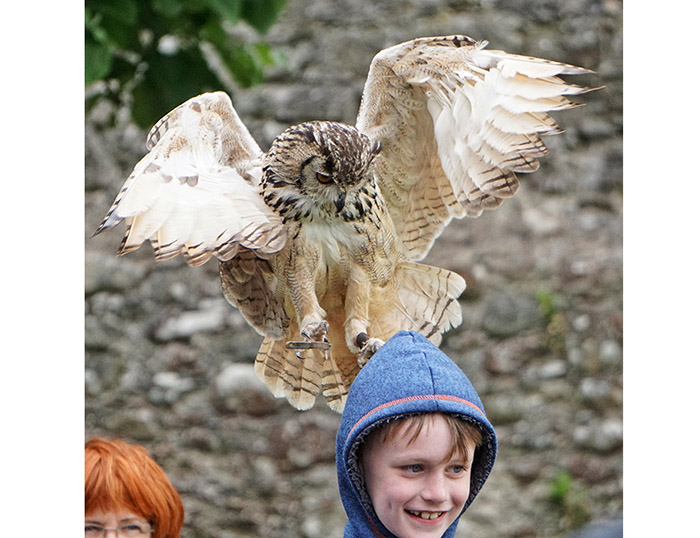 Until you get whacked in the head by an owl, you probably wouldn’t.

Humans, you see, are the largest of the mammals.

The vast majority of animals will make themselves appear threatening, growling or hissing at the sight of a person.

They can fake their way out of any potential confrontations this way.

Owls, on the other hand, are timid birds that rarely make noise.

It’s possible that owls wouldn’t even bother trying to scare away a person before leaping upon them and slashing them with their talons.

Even so, owls don’t always hide their intentions from humans.

Following are some of the more common warnings of an impending owl attack:

Another point: most owls don’t warn their prey of an impending attack.

In any case, you’ve gone too far if an owl is spreading its wings in an attack formation.

Thus, in order to stay out of harm’s way, it’s important to recognize the owl’s potential assault windows:

Now, what do you do if an owl actually attacks you?

How Do You Stop An Owl Attack?

The following are some of the steps I propose taking:

The only way to see owlets in their nests is to climb a tree, and doing so is a surefire way to invite an assault.

If the owl is really persistent, you can try scaring it away with a bag or other object.

Though, most owls aren’t strong enough to rip through human clothing.

As a result, owls typically only cause mild harm.

Can An Owl Kill a Human?

If a person ventures too close to an owl’s territory or nest, the owl will strike.

However, it is unthinkable that an owl would ever kill a human being (thankfully)

In my opinion, owls are not dangerous to humans.

Wrestling an owl and having one of its talon penetrate an artery is the only way this could happen to a human.

Which Owls Are The Most Likely To Attack Humans?

In terms of owls, great horned owls have a reputation for being the most dangerous.

They can attain a maximum height of 1 meter and a maximum weight of 2 pounds. Around 2 meters in width, their wingspan is impressive.

Avian experts think that each foot has a grasping strength of about 500 psi.

You could also claim that the great horned owl’s grip is as powerful as a huge hound’s bite.

Great horned owl attacks on humans have been reported on a few occasions, including the following:

Barred owls are only found in the northern parts of North Carolina, Texas, and British Columbia, but great horned owls can be found all over the Americas.

The average adult barred owl is 0.6-1 kilogram in weight and stands 1-1.5 feet tall.

This species of bird has a wing span of 1.5 meters.

However, the Kathleen Peterson Case is what brought widespread attention to barred owls.

The case unfolded as follows:

Michael Peterson, an American novelist, was found guilty of murdering his wife with a blow poking from the fireplace in North Carolina in 2003.

As of that year (2011), the evidence for the murder weapon was deemed to be unreliable.

According to Kathleen’s attorney, the woman’s hair became trapped in a barred owl’s nest when she was under the influence of alcohol and valium.

Her head was hurt by the owl’s beak.

On her way up, she took a tumble that resulted in a fatal neck injury.

Micheal was released from prison in 2017 after entering a guilty plea to voluntary manslaughter.

However, assaults on people by other types of owls are on the rise.

On the other hand, the destruction of natural ecosystems due to human activities may be to blame for the rise in the frequency of such attacks.

Has An Owl Ever Killed a Human?

No reliable information has been received.

However, there have been unconfirmed stories of owls murdering humans, including one in which an owl was blamed for a woman’s death.

This never made it to court, so we can’t be sure whether it’s true. What we do know is that an owl can kill a human if it so chooses.

Although owls are often not sociable, with the right upbringing they can become mildly affectionate pets.

Day or night, if an owl feels endangered, it will attack a human.

Any moment could be the one in which an owl decides to launch an attack.

However, by taking some measures, you can lessen the likelihood of being attacked.

Even the deadliest owls might not be able to kill a human.