The Squirrel Buster bird feeder range may look like a maze of cages, bars, and springs, but filling them is a breeze.

The eight different Squirrel Buster feeders on the market can only be opened in three different ways. To replenish the seeds, you’ll need to know how to break open the feeder’s peanut and suet block. The cage cover can be removed by twisting and pushing it open, or by removing a hang bar. 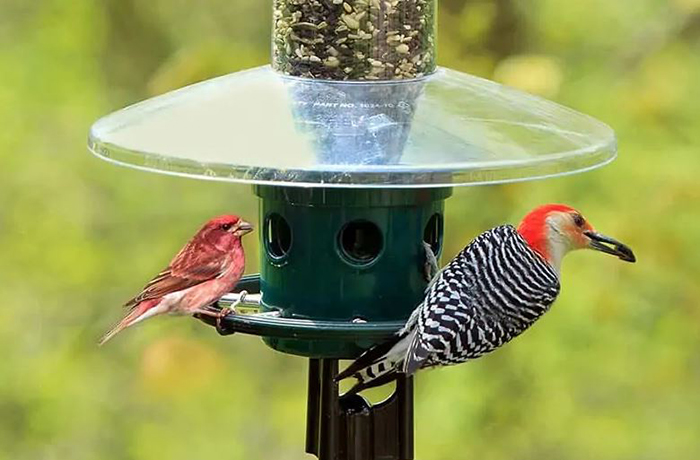 If you own a Squirrel Buster bird feeder sold in the United States, you can use this instructions to learn how to fill it correctly.

While the Squirrel Buster Classic may be the most well-known model, its siblings—the Suet, Mini, and Peanut Plus—are all enjoying considerable success as well.

In spite of this, any of them can be opened in a matter of seconds by anyone, even a toddler.

Some Squirrel Busters require the hang bar to be removed before the cage shroud can be lifted up and off; alternatively, the lid can be twisted with a push-down motion before being lifted up and off for filling.

Finally, fill the interior plastic tube to the top with seed mixtures or nuts using a bird feeder scoop funnel or a mug full of feed.

How to clean Squirrel Buster Bird Feeders involves more than just taking off the cage cover when you need to restock on food; on occasion, you’ll need to take the whole thing apart and give it a good scrub.

Fill up by Squirrel Buster type 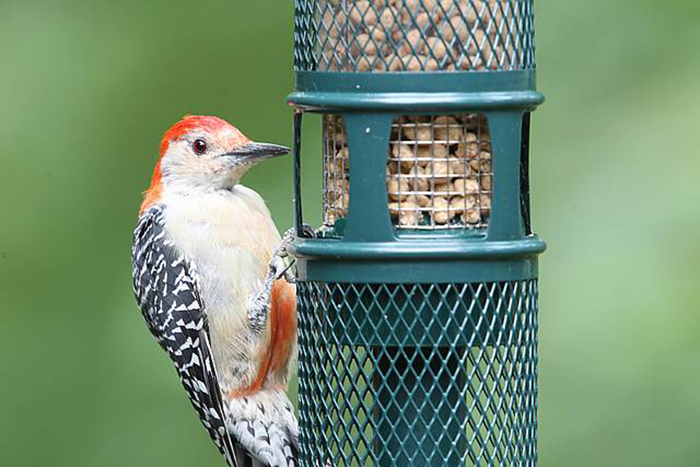 With only three simple refill options, knowing how to refill a Brome Squirrel Buster is child’s play.

The regular Squirrel Buster is very easy to load up with food; all it takes is a few simple steps to get the top off and start pouring in the seeds.

We need to crack open the Standard and add new seed, so here’s how to do that…

To remove the metal bar, lift the long hang pole resting on top of the lid, tilt it to one side, and then take it out of the corresponding hole in the steel pole.

Now we may dismantle the cage and remove the covering.

Next, fill the transparent plastic tube to the top with a bird feeder scoop or mug holding up to 600 grams of seed mixes.

The Squirrel Buster Legacy may not be easy to get in stores nowadays, but it is still useful to know how to restock your supply.

To remove the entire cage cover requires only a few simple motions and is as straightforward as it gets.

Simply removing the hanger from the hole insert is accomplished by lifting the hang bar located on top of the lid.

At this point, you can unbolt the cage cover and lift it up and away from the transparent plastic tube.

This is a larger squirrel-proof seed feeder, so fill it with a jug or scoop until it reaches its maximum capacity of 1.2 kg.

This is the Brome Squirrel Buster model with the largest seed capacity; to access the seeds within, simply screw the feeder’s cover up and off.

What you do is push down on the lid until it stops rotating counterclockwise, then raise up and the lid will come off.

If you just want to pour in up to 2.3Kg of seed mixes, the lid can be removed entirely for your convenience.

The open top on the transparent plastic tube allows you to fill it with feed while the lid top hangs over – but is still attached to – one side.

It would be necessary to disassemble the feeder for cleaning if the lid were to be removed, but as we are just filling it up, that is not necessary at this time.

Filling the Squirrel Buster Classic with seeds is as simple as can be, since we don’t want to damage the wire the cover is attached to.

The Squirrel Buster Classic can be filled by setting it upright on a table or other flat surface, pressing down, twisting until it stops, and lifting off the lid.

You shouldn’t lift the lid too high, as doing so could cause it to detach from the wire it’s attached to; however, since we’re just adding water to the Squirrel Buster Classic, we can let the lid hang off to the side.

Of course, that would allow us complete access to the transparent plastic tube into which we may place up to 1 kilogram of seeds.

The Squirrel Buster Classic is more convenient because the cage shroud doesn’t have to be removed when more seeds are needed.

The Squirrel Buster Finch was created in Canada and is marketed toward a North American audience, although it may be used in the United States with Nyjer seeds or sunflower hearts.

This is how we pack it full of premium bird food.

In order to open the lid, gently rotate it counterclockwise and push down on it at the same time.

If the lid can be lifted and swung to one side, there’s no need to unshackle it from the wire if it won’t get in the way of filling the container.

You can fill the plastic seed tube with up to 1Kg of nyjer seeds, sunflower seeds, or seed mixtures through the top, where the cap has been removed.

Brome’s Squirrel Buster series includes a peanut feeder that is essentially squirrel proof and is just as simple to use as the rest of their seed offerings.

If we want to add peanuts, we’ll have to open up the inner mesh cage where they’re stored.

Then, we’ll need to raise the hang bar above the inner bar to disengage it.

To completely free the cage shroud from the peanut port, we must first remove the hang bar.

The clear plastic tube can hold up to 600g of peanuts, however it should only be filled halfway since the bottom half is used to catch dropped nuts.

Even though it’s called the Mini Squirrel Buster, this seed feeder has a 454g capacity, making it more than capable of feeding even huge birds.

When you need to restock your Squirrel Buster Mini, just detach the hang bar from the metal bar located beneath it.

Use the ring to pry the cage cover off the plastic tube containing the seeds.

The aperture at the top of the tube can be used to dispense a suitable quantity of seed mixture.

The feeder stands upright on the ground, making it simple to fill it and all other Squirrel Buster items.

The Squirrel Buster Suet is as simple as opening it and placing one or two suet blocks inside.

To get the ball rolling on setting up the cage for filling, just stand up the Squirrel Buster Suet and unhook the hang bar from the metal bar concealed underneath it.

Then you can lay it down and lift it up and over the green horizontal clamp, revealing the yellow suet plate that has been fastened behind it.

This yellow suet plate needs to be removed, and then a second metal clamp needs to be pulled up. At this point, you can either press a suet block in by hand, or, to avoid becoming greasy, you can simply pop it in straight from the container.

Fill the second piece of the squirrel resistant suet block feeder on the other side in the same way.