Why Do Vultures Spread Their Wings

Having a large stature is associated with dominance and power in animals.

As a result, a vulture in danger may stretch its wings wider than usual.

The vulture is also able to leave at a moment’s notice thanks to this ability.

As for the sunbathing habits of vultures, they are known to do so on a regular basis in the morning.

So, if you’re curious, the answer is:

Why Do Turkey Vultures Spread Their Wings? 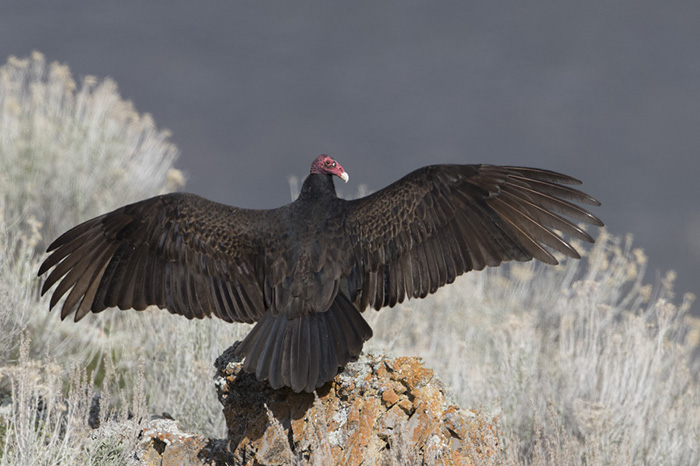 Reasons for this include, but are not limited to:

In spite of their size, raptors can’t fly simply by flapping their wings.

Because of this, they’ve learned to fly by gliding on rising air currents known as “thermals” instead.

Now, the uneven heating of the Earth’s surface by sunlight exposure creates these thermals.

Consequently, their flight is in sync with the sun’s position in the sky.

These thermals usually occur in the same places.

Weather and sunshine intensity have a significant impact on the path they take.

If the wind direction is unknown, raptors can use their wings to discover other raptors that are circling on thermals.

It’s possible that it is searching for a thermal if it has its wings wide open while sitting on the ground.

When threatened, animals often enlarge their bodies to make them appear larger than they really are.

It’s a sign of power that something is so enormous.

In the case of a predator, a large animal is unlikely to be attacked.

As far as raptors go, the turkey vulture is one of the most benign.

The first thing a turkey vulture does when threatened is to puke and flee.

However, the stakes are raised if a turkey vulture is nesting nearby and has young.

During the process of protecting its young, a turkey vulture may expand its wings to give the impression that it is a serious threat.

In addition to their keen vision, turkey vultures have evolved olfactory nerves that enhance their keen sense of smell.

Turkey vultures are the first scavengers to discover a dead body, in case you didn’t know.

For this very reason, scavengers such as black vultures search for Turkey vultures rather than carrion.

Black vultures, on the other hand, are known for their violent natures.

Black vultures are known for making turkey vultures wait for their turn to eat.

They flap their wings to scare away the black birds if food is limited.

Early in the mornings, vultures have been observed sunbathing.

In most cases, vultures are positioned on the ground or treetops, facing away from the sun, with their wings spread wide to protect them.

Vultures’ backs are angled like solar cells to get as much sun exposure as possible.

“Horaltic Posture” is the name given to this position.

You may think that vultures are sunbathing like lizards, however this is not the case.

Vultures, on the other hand, are birds, whereas lizards are animals.

So, as you can see, reptiles are cold-blooded creatures.

They are unable to control the temperature of their own bodies.

For this reason, they require regular exposure to sunshine.

In order to regulate their body temperature, lizards must spend time in the sun

Most reptiles, on the other hand, have evolved to maximize their exposure to the sun in a short period of time.

Crocodiles, for example, have hard skin and bone plates called “osteoderms” on their bodies.

An large network of blood vessels surrounds these skeletons.

Crocodile blood circulates throughout the body within a few minutes of being warmed by the sun’s rays.

Birds, on the other hand, are self-regulating endotherms.

As a result, vultures and other nocturnal birds don’t use sunlight to generate heat in their bodies.

In order to keep heat from escaping, a bird has to have measures in place to keep it warm.

That doesn’t answer the question:

Why Do Vultures Take Sunbathe? 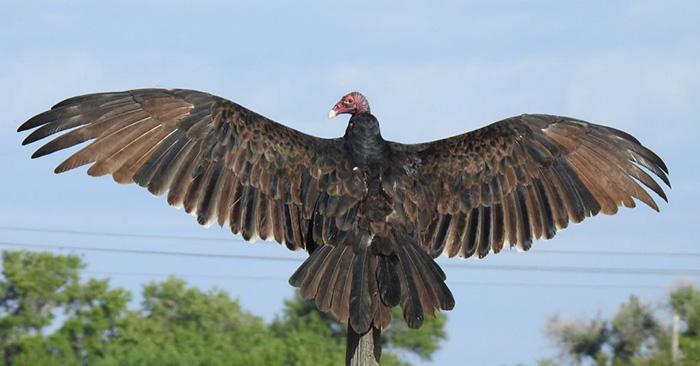 Ornithologists are still baffled as to why a vulture would need to take a sunbath at all.

The following arguments are supported by scientific evidence:

Vultures, like other birds, have to store their energy in order to survive.

In the open locations where vultures reside, the temperature can change dramatically in a single day.

Hundreds of vultures snuggle together in rock cracks to keep warm.

Even communal roosting, however, is of limited use when the nighttime lows fall below freezing.

Vultures have adapted to reduce their energy requirements by slowing down their metabolism in order to avoid the cold.

Sunlight causes the temperature to rise as the day progresses.

Vultures, on the other hand, require time to acclimate to room temperature.

They may have two alternatives to choose from:

It is easier and more efficient to warm yourself up by soaking in the sun’s rays.

Every night, when the temperature falls, the moisture in the air builds up.

This is why we see dew drops on the foliage and flowers of trees and plants.

Birds, like animals, can accumulate water droplets in their wings.

So, it’s possible that vultures take sunbathes in order to keep their feathers dry and avoid frizzy wingspans.

The feathers of all vulture species are dark in hue.

As a result, dark colors are better at absorbing heat quickly.

Consequently, ornithologists think that vultures with dark plumage have been selected for by natural selection over the course of their evolutionary history.

Black vultures were more likely to live, therefore all light-colored vultures had no chance to reproduce.

This led to the conclusion that “Perhaps vultures do need sunlight in order to thrive.”

Vultures are exposed to a variety of germs and mites on a regular basis because to their frequent contact with decomposed remains.

So, according to Ornithologists, vultures use the sun’s rays to get rid of vermin.

Vulture feathers were subjected to a variety of tests.

A vulture feather can reach 120-140 degrees Fahrenheit after being exposed to sunlight for 10 minutes, according to one research.

Microbes may be damaged by UV light at this temperature.

Vulture skin bacteria can be killed by exposure to the sun.

Inquiring minds may wonder, “How can temperature kill a mite?”

In the meantime, imagine a black automobile in the sun on a hot day.

If you were to take this vehicle for a spin, you’d instantly turn on the air conditioning.

Alternatively, you may begin to feel confined.

Pests like mites and other critters do exactly what you’re seeing here.

Suffocation is so bad they had to move on feathers.

However, as they build up, preening makes it simple to get rid of them.

Unlikely to be the case.

You see, the length and width of a feather mite are both less than one millimeter.

As a result, eliminating them via preening takes a long time and achieves little.

Mites can be killed or slowed down by sunshine exposure, as well.

Vultures may benefit from sunbathing for a variety of reasons.

Vultures sunbathe for a variety of reasons, according to ornithologists.

Vultures soar higher than any other birds in the sky.

As a result, they’re more inclined to wait until the sun has risen before venturing out in search of thermals.

A possible reason for their sunbathing is to await a change in wind direction.

However, there have been few studies to back up this claim.

A sun-baked corpse is more appetizing to vultures.

As most ornithologists have noted, this is a group of vultures gathering to confirm the death of a prey item.

Few people, on the other hand, deny that vultures also use sunshine to reduce the diseases in their prey.

As a result, a vulture may be sweltering on a carcass as it dries out.

To say this is a stretch is an understatement.

Serotonin, a hormone critical to the alleviation of depression, is released as a result of exposure to sunlight.

As a result, it improves mood by reducing Seasonal Affective Disorder.

So, it’s possible that vultures sunbathe to relieve stress and stabilize their moods.

However, no vulture-specific research was done.

However, vultures aren’t the only raptors who can fly.

What Does It Mean When Birds Spreads Their Wings? 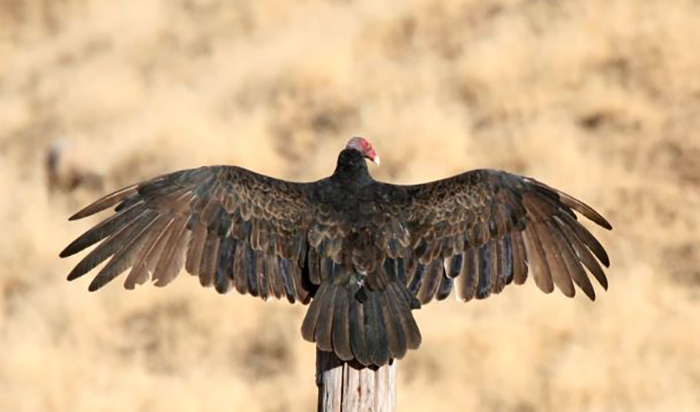 It can mean a lot of different things, depending on the context.

The following are some of the more typical explanations:

Avoiding a predator is as simple as hiding or pretending you’re invincible.

As a result, when threatened, birds will expand their wings.

Ostriches, which spread their feathers to repel even wild cats, are a common example.

Many species of birds, such as parrots and crows, can fly with their wings half open on an instant’s notice.

Young hawks and eagles are also prone to this behavior.

For the most part, birds like to stay in trees.

Raindrops or dew drops will inevitably saturate their feathers.

Even fog appears from time to time.

Therefore, it has been reported that a number of birds, including doves, rails, and swallows, extend their wings every day.

Mates with desirable traits are more likely to survive than those without them.

Having a large head and large body is a sign of authority.

The larger the male’s feathers, the more attractive he is to female birds. As a result, the primary purpose of bird mating rituals is to demonstrate the extent to which the wingspan is extended.

A male peacock dancing, showing his bright feathers, is one of the most stunning displays of spreading wings.

Birds other than vultures are known to sunbathe on their backs.

At least 50 different kinds of bird families have been documented sunbathing thus far.

birds of prey and doves are a few of the many species that can be seen in the area.

Birders, on the other hand, believe they may not be laying out in the sun for the same reasons.

However, the following is possible:

In order to conserve energy, hummingbirds are able to lower their metabolic rates to a fraction of their regular levels.

The “Torpor Effect” refers to this adaption.

However, the body’s temperature drops as a result of this.

Flapping or simply lazing in the sun is all that these birds require to raise their body temperature.

People sunbathe for the same reasons.

About nine percent of a bird’s life is devoted to caring after its feathers.

Rearranging the fibers and applying natural oils to the feathers are all part of preening.

Bird wings can become frizzy if water is trapped in the fibers of their feathers.

The number of avian pests and viruses can be reduced by regular sunbathes.

In 1993, researchers at Virginia Commonwealth University found this to be the case in a study of doves and swallows.

Pesticides to eradicate mites from birds’ aluminum roofs reduced the amount of time they spent sunbathing.

To fly or to appear threatening, all birds expand their wings.

To dry their wings or attract mates, certain birds do so.

For the same reasons, vultures may flap their wings.

They are, nevertheless, well-known for opening their wings every morning to enjoy the light.

They may be doing this to keep themselves warm or to get rid of unwanted guests.