Concealing drugs from a trained sniffer dog is not easy because of its high sense of smell. A dog’s sense of smell is 10,000 times higher than that of a human. It is actually the most dominant of its senses after sight and hearing.

In ancient times, people used dogs mainly for hunting, racing, sports, and security. However, dogs became part of the military and police operations worldwide in the last century, with some of their most prominent tasks being sniffing out drugs, explosives, cadavers, and bombs. The applications required of detection dogs to carry out outweigh the dog breeds specially trained for such tasks.

Even if it is just a few dog breeds trained to smell drugs, they are extremely good at what they do. However, even the best dogs err, and there are situations where they cannot sniff drugs. Some people conceal drugs from even the best sniffer dogs and get away with it. How? Read on to find out.

5 Ways of Concealing Drugs from a Sniffer Dog

Irrespective of how powerful a sniffer dog’s sense of smell is, the following situations are challenging to them when it comes to sniffing out the presence of drugs.

The only way the dog would smell drugs stored in a porous metal or glass vacuum-sealed container is if the drugs’ handler leaves scents outside the container. Plastic has very tiny microscopic holes that eventually allow the odors to leak out.

Some people believe that concealing drugs in powder with overwhelming smells such as dried pepper and chili will throw the dog off. However, this would be risky because if, after smelling the chili powder, the dog sneezes, the cops will want to find out the reasons behind the sneeze. Again, trained dogs can quickly identify a single odor in a mixture of smells, just as we can locate one color amidst many others.

In the same way as the chili or dried pepper, some people have also gone to the extent of hiding their drugs inside ground coffee beans. The smell of coffee is powerful, and for a human, it can mask any other scent. However, it is not the same with dogs, and most likely, they may sniff the drugs out. 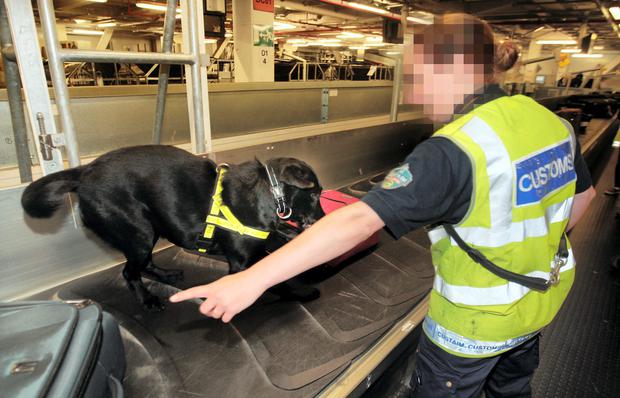 Dogs love meat, and the smell of it might confuse them to forget about searching for drugs. However, you have to remember that dogs trained for this kind of job have great discipline, and using meat may be futile.

The meat you carry to confuse the dog must either be fresh or raw for smell enhancement. You also have to be very careful if the authorities decide to check further because finding you with a cooler filled with rotten or fresh meat will raise eyebrows.

4. Keep the Drugs Much Higher From the Dog’s Range

Even if a dog’s sense of smell is powerful, it has range limitations. A dog can only snuffle things close to the ground or underwater because they are within their range. Items stored much higher are out of scope for the dog unless its handler lifts it to do the sniffing.

Some people claim that freezing cannabis before storing it into an airtight container conceals the smell. The method prevents terpenes, which are responsible for the cannabis smell, from diffusing into the air.

If you are traveling far, this may not work because, by the time you arrive, the ice will have thawed, the container will have gotten a few knocks here and there, and some of the trichomes may fall off along the way, which makes it easy for the dogs to sniff you out.  Even if you get past the sniffer dogs, the potency of the weed will be too low.

It is not easy to get past a sniffer dog with a stash of drugs, even if you conceal your drugs in an airtight vacuum-sealed container, which by far is the best way of evading sniffer dogs, there is no guarantee that you will go past their powerful sense of smell. The only alternative? Do not carry drugs and if you have to carry them, do so in states where the law allows you to do so.