Dogs love rolling on things such as the carpet, floor, seats, bed, and lawn, and so on. They roll on almost anything with a strong smell irrespective of whether the odor is pleasant or offensive. When you find your dog rolling or rubbing on its poop or shoes, it may not come as a surprise to you; however, as a dog rubbing its face on soap may raise eyebrows.

The behavior is rare, but it happens. When you see this, please do not assume the dog needs a bath because that is far from its intention. Sometimes the dog is just being itself, or there could be another reason for it. So what makes a dog rub its face on the soap?

Reasons Behind A Dog Rubbing Its Face On Soap

Dogs have an immense sense of smell. Smells allow them to feel like they belong and to mark their territories. There are several reasons why a dog would want to rub its face on soap.

In ancient times, dogs walked in packs, and one of the ways they could recognize members of their pack is through the sense of smell. In homes, people that lie with the dog are members of its pack. One of the most distinctive smells of a dog owner is that of soap.

Your personal scent has a hint of soap smell; a dog will want to feel your closeness when you are not around by rolling its face on the soap you use. When you go away, the dog goes through separation anxiety, and smelling you through the soap gives it comfort and a sense of security.

2. Masking Their Own Scents

The second reason a dog would roll on soap is to mask its own scent, a practice that dates back to its wild ancestral genetics. The same practice is common among wolves that belong to the same family. Dogs and many other wild animals try to mask their natural scents by rolling onto other more pungent odors to keep predators away.

Masking their scent is a camouflage that makes them feel invisible to their attackers and their prey. A dog will roll on anything with a stronger scent than its own, including perfume, soap, trash, and even its own poop, for the same reason of trying to change its natural smell. Why pet dogs try to mask their scents in their safe home environments is hard to explain.

3. Because they are just being dogs

The last reason could be that dogs, just like being dogs, and will roll on anything with a scent. Their intense sense of smell picks up ingredients from objects better than we can. Some of the soaps contain ingredients such as animal fat and fish oil that appeal to the dog. By rolling on the soaps, they want to take in as much of the dead animal smell as they possibly can.

Is it safe for the dog to rub its face on soap?

Even if some soap contains natural ingredients that are harmless to the dogs, many others have harmful, and toxic properties that could cause skin irritations, stomach upsets in case of digestion, and other dangerous reactions. 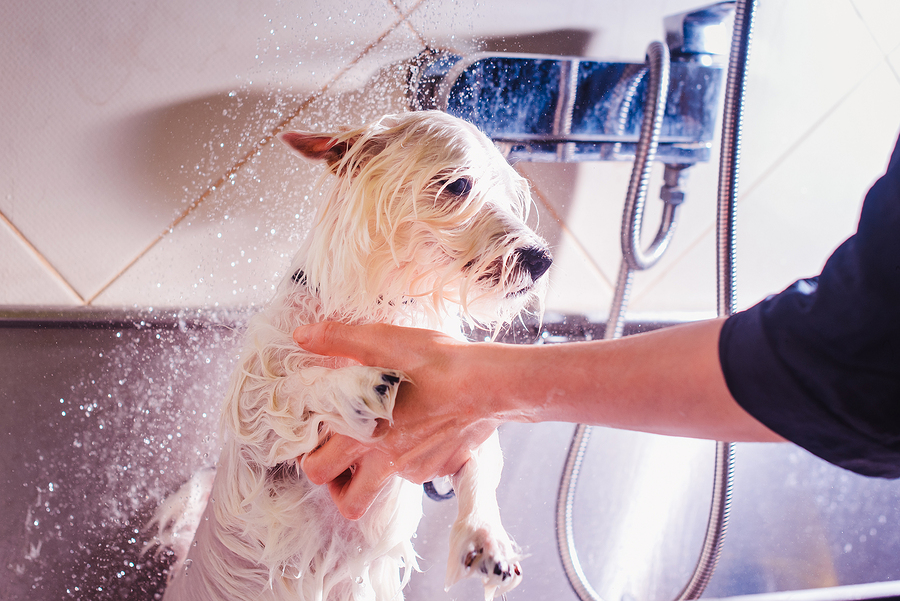 The first thing you should do is try to find out the reasons behind your dog’s behavior. If it is something that you can stop, do so immediately to avoid any repercussions from the harmful chemicals in the soap. Other steps you can take include:-

Rolling or rubbing its face on soap is not the strangest thing for a dog to do. It should not cause too much alarm, but it is an undesirable behavior that you should stop. You should everything you can, which includes training the dog to stay away from the soap. You could also help by ensuring that soap and other items that could harm your dog are out of reach. If everything fails and your dog still reaches out to play with soap, seek advice from a vet.