If you had the opportunity to watch the movie Marmaduke, you might have asked the question of what kind of dog is Marmaduke. Even if you did not watch the film but saw the preview or read about the movie, you still may have wondered what kind of a dog Marmaduke is and if it truly is a real dog breed.

I know for sure that Marmaduke, the movie, and Marmaduke, the dog with the unique traits, are hard to forget. Read on to get an answer to What Kind Of Dog Is Marmaduke.

What Type Of Dog Is Marmaduke?

Marmaduke is a Great Dane breed and one of the tallest dogs globally, with massive size, a healthy demeanor, reckless behavior, and the protagonist in the movie Marmaduke. The dog is a descendant of the German domestic dog breeds. In the film, Marmaduke, who measures a whopping 40 inches with a weight of 160 pounds, belongs to the Winslow family.

That answers the question, what type of dog is Marmaduke but continue reading for more information about the wonderful Marmaduke. George, the real-life dog that played Marmaduke, is just as lovely as his role in the movie. Just as the film portrays, George is a messy, reckless, and very tall dog in real life.

Before the comedy Marmaduke, a cartoon strip featured Marmaduke. The comic strip was a hit worldwide. The cartoon won the creator brad Anderson the noble Reuben award for newspaper panel comic, awarded in 1978, the national cartoonist society. In the film, George plays the protagonist.

The family comedy that lasted for one hour and thirty-nine minutes is about the Winslow family and their dog, Marmaduke. The family-based it’s content on the Marmaduke cartoon strip by Brad Anderson. Own Wilson does the voice over of the dog, played by George in the comedy film. 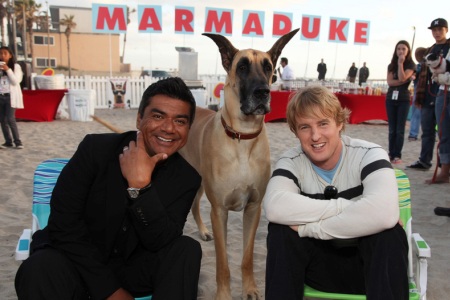 The film focuses on Marmaduke’s mischief, including getting in and out of trouble, surfing, and much more. One of the most confusing things about the comedy film is how a real dog manages to behave so well and act all the roles to perfection. Is Marmaduke a real dog, or the acting was all some film tricks? To put your doubts into peace, here is the answer.

A real-life dog-no film tricks acted the role of Marmaduke. When filming the Marmaduke film, George, the real-life dog, was three years old. According to the dog’s trainer, Tasha Zamsky, George was not any pain during the filming. In fact, Tasha says that George acted like the perfect gentleman throughout the filming.

Tasha also went further to say that George learnt his roles quickly and much faster than everyone expected. Before the beginning of any shooting, George made sure to greet each member of the film crew and he was friendly all through the filming making him a darling of everyone on the set.

Beside George blending quickly with all the other set and crew members on the set, or his ability to learn his roles with speed and to perfection, he was also an excellent surfer. His natural prowess at surfing got the attention by the other members at the set.

I have not come across any person that watched the comedy film Marmaduke and did not fall in love with the Great Dane. Marmaduke, the Great Dane, is lovable, friendly, mischievous, cute, which is everything anyone would want in a puppy.

It is not surprising that anyone would want to have a Great Dane puppy because it makes a wonderful addition to the family. However, just as much as the Great Dane is a friendly, lovable, and peaceful dog, you also need to know about all the things to expect once you decide to go down that road.

Brief History Of The Great Dane 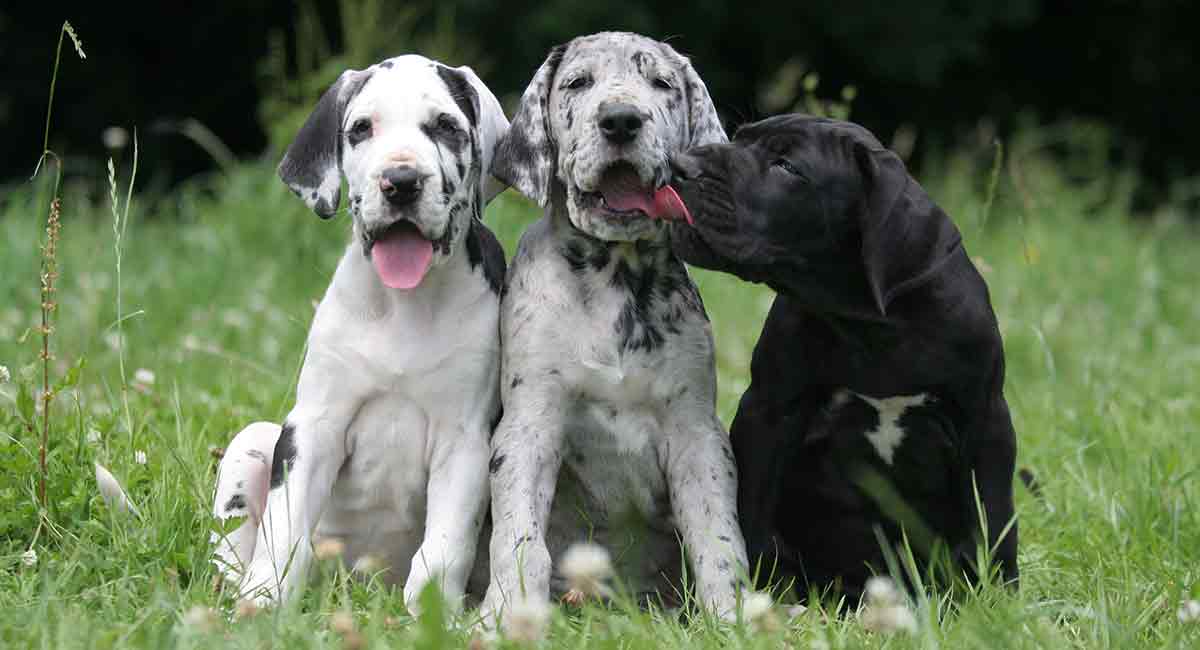 Great Danes date back to the 3000 BC on Egyptian artifacts and Babylonian temples. Reports also indicate that similar types of dogs have their origins in Tibet. Assyrians took the breed to other parts of the world by trading them to the romans and the Greeks who bred them with other dog breeds. Some people also believe that the greyhound and Irish Wolfhound are some of the dogs that English Mastiffs bred the Great Dane with to come up with the current breed.

Originally, Great Danes went by the name boarhounds because of their hunting abilities. The name later changed to English dogges. In the late 1600s, German nobles started to keep the dog breed, which they called chamber dogs (kammerhunde). The nobles pampered the dogs and walked them around with gilded collars that came with velvet linings.

The Great Dane name first arose in the 1700s. a French naturalist acquired a dog that he thought was a different Boarhound version. The dog looked more like the Greyhound and slimmer than a Boarhound. He named the new dog grand danois, which later changed to Great Danish dog. even though Denmark had nothing with developing the dog, the name stuck.

There is no history of when the Great Dane made its entry into America or even very clear reports of the exact origin of the breed. However, in 1889, the Great Dane Club Of America started and it became the 4th breed club to join the American Kennel Club.

The first thing you need to consider is that you will be dealing with the huge size of the Great Dane. One of the most striking features of the Great Dane is the extra-large size. Great Dane pups are larger than other breed pups. If you like, your dog tiny, then you should cancel the Great Dane off the list. If you do not have enough space in your house to accommodate a Dane and its mischief, go for another breed.

Great Danes eat large portions of food to maintain their large sizes. you may need to makes changes to your budget to accommodate the extra food portions for the Dane.

If you want to use your car to transport a Great Dane, you may have a problem because of the size. Remember, the Great Dane is an extremely tall dog that may have problems fitting well in an average family car. It takes lots of space, so you may end up leaving it behind unless, you do not have to do it, or you have a small family.

When buying a Great Dane pup, you should do it from a trusted breeder and not from those that do not care much about the health of the dogs. Dogs bred in places that do not practice good hygiene or keep the health of the canines as their top priority end up breeding sickly and unhealthy pups.

The Great Dane is highly susceptive and prone to some specific health issues. the health issues most common with the Danes are cardiomyopathy, bone cancer, hip and elbow dysplasia, and gastric torsion. One of the best places to start your search for a healthy Great Dane pup is any Great Dane rescue near you or any reputable dog shelter near you.

The advantage of getting a puppy from reputable shelters is that they take the health of the pets seriously and give them the necessary vaccines against some of the most common illnesses.

Is Marmaduke A Dog Breed Name?

Some people may be wondering if Marmaduke is a dog breed like German shepherd, or Tzu shih or bulldog. Marmaduke is not a dog breed but the name of a dog character in a cartoon strip and a comedy film. The newspaper comic strip by brad Anderson ran from 1954 to 2015.

The film, Marmaduke was inspired by the comic strip by the same name and it involves the same Winslow family and their Great Dane Marmaduke, portrayed on the comic strip. When a person says they want a Marmaduke, or would like to own one, the dog breed they are referring to is the Great Dane.

Danes are moderately playful and affectionate dogs that love everyone around them. They also care about children and hey get along well with other animals. However, if a Great Dane comes across a dog breed it does not like, it becomes aggressive.

Another Great advantage of keeping a Great Dane is it does not require much exercise and as long as you feed it with a healthy diet, you are good to go. Simply put, a Great Dane is a gentle giant you will love as an addition to your family.

What Kind Of Dog Is Marmaduke? I hope the article answer the question to your satisfaction but just in case you need a reminder, Marmaduke is a dog made popular by a comic strip and comedy film. It is the name given to a Great Dane of the German canine breed.

People that read the comic strip or watched the movie fell in love with Marmaduke, thus the interest. Besides the comic strip and movie, the mention of the Great Dane in the Guinness book of records as the tallest breed in the world, also contributed to interest in the breed.