Should I Take Down My Bird Feeder

Depending on your specific situation, it may not be necessary to take down your normal bird feeders at any time during the year.

Do not routinely take down bird feeders to cater to the demands of certain bird species; while certain species may eat less seeds or insects in the summer or winter, others will continue to feed as usual. When a storm is approaching or frost is predicted, it’s best to bring the feeders inside and store them until the weather clears. 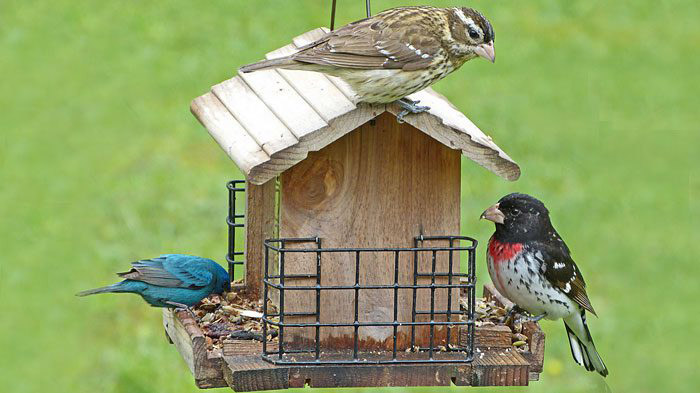 When I say that you shouldn’t put away your bird feeder for the winter, I’m referring to ones that are designed to stay up all year round in the yard.

Seed mix, peanut, suet, and dried mealworm feeders should never be dismantled and put away. Even if some birds eat less of one type of food but more of another, they will nonetheless continue to eat from these categories throughout the year.

Taking down bird feeders has less to do with the feeding habits of wild birds and more to do with protecting the feeders you already have up.

It’s not worth the risk of having your feeders break or get blown across the neighborhood if you leave them outside during a storm.

Similarly, a heavy overnight frost can render seeds, nuts, and suet unusable by wild birds the following morning. For this reason, it is advisable to temporarily remove bird feeders, but to replace them before the birds return.

Squirrels, raccoons, and even bears are typical backyard pests that can be deterred from your bird feeders by bringing them inside during the day.

Only the bird food should be removed if the feeders are too heavy to carry, as in the case of a platform feeder.

Having established that bird feeders should not be removed, I must add that the same cannot be said for hummingbird feeders.

Since hummingbirds leave the United States in the early fall, you can clean and store your feeders until next spring.

No, not the typical kind used to hold peanuts, seeds, suet, or mealworms and favored by birds.

It is imperative to provide year-round bird feeding, as your wild birds may come to rely on feeders in times of crisis. Summer droughts are not uncommon, and harsh winters can wipe off their natural food supplies in the wild.

All of the birds that use the feeders will be content to return on a daily basis, so there’s no need to take them down.

These typical backyard birds rely on a regularly stocked array of bird feeders, but perhaps less so at different seasons of the year.

It’s possible to give more attention to seed feeders throughout the year, whereas feeders that can only be used with mealworms can probably be taken down during the winter, when some birds switch back to eating insects in the wild.

It’s important to remember that some kinds of wild birds prefer seeds to insects in the summer and vice versa during the winter.

Since you can provide the birds in your yard with the food they need regardless of the season, there’s no reason to take down the feeders. 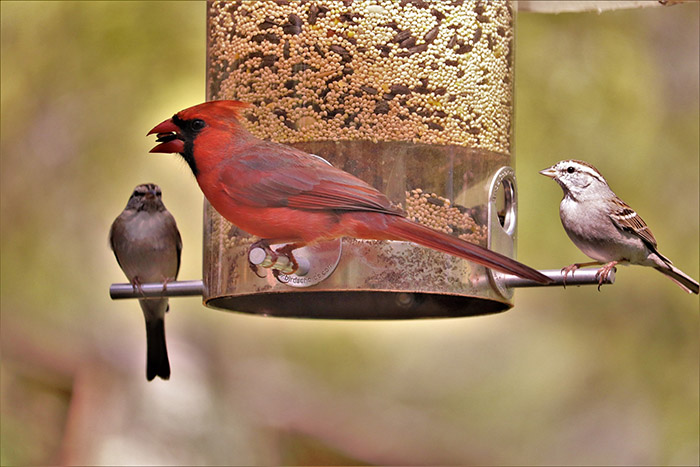 Taking down bird feeders is less about the needs of the birds and more about protecting the feeders themselves.

When bad weather is expected, it makes little sense to leave bird feeders, which can be easily broken, outside.

Wild birds still need access to wild bird food, therefore I’m not suggesting taking all feeders indoors for the length of the storm.

If you want to keep feeders out in the yard, wait until the storm calms down a bit before doing so, and bring them all inside as soon as the weather begins to deteriorate.

During a hurricane, strong winds and heavy rain might force you to bring your bird feeders inside.

Birds have a hard time maintaining their vigor if they can’t eat the food in the wild or at feeders for extended periods of time during bad weather, therefore it’s important to leave them up as long as possible.

If you insist on leaving your feeders outside during a storm, remember that wild birds can always scavenge the spilled food from the ground.

Overnight frost can be even more of a threat than storms to bird feeders, so take additional care to protect them.

It’s good news that morning frost usually disappears without a trace, but if the temperature stays below freezing for several days or weeks, it may prohibit wild birds from using your bird feeders.

Bird feeders should be taken down and stored in a warm, dry place, preferably indoors or in a garage or shed where they won’t freeze.

Long periods of frost make it difficult for birds to find food in the wild because the ground becomes too hard to forage for insects and bugs, and because wild fruits wilt and their seeds become unreachable.

Keep providing abundant food for wild birds, even during the cold winter months, by covering the feeders briefly to keep them from freezing over.

Freezing temperatures can cause peanuts and other seeds to fuse together, while dried mealworms and suet cakes can harden into rock.

Taking the feeders down at night and replacing them on the bracket or tree branch in the wee hours of the morning will prevent this from happening to your birds.

In the event of a storm or frost that may potentially freeze the bird food in the feeders overnight, the decision of when to take them down would be a personal one.

In the event that common garden pests become a problem for you, removing bird feeders is a viable option.

Animals like squirrels, raccoons, and beards may become common sights in your yard, and they may also become regular scavengers in your bird feeder.

In order to prevent this from ever happening, you would need to find a compromise, as bringing the feeders inside would mean taking away a critical food supply for your birds.

At this juncture, however, you’ll need to put in the most effort to establish a middle medium.

If thieves target bird feeders at night, you can prevent them by putting them away for the night.

To prevent bears and squirrels from raiding your bird feeders during the day — or, in the case of bears, destroying them — take them down before they arrive and put them back up after they go.

Try removing bird feeders from the yard for a few days to see if the pests go. If they do, you can rest assured they won’t be back. 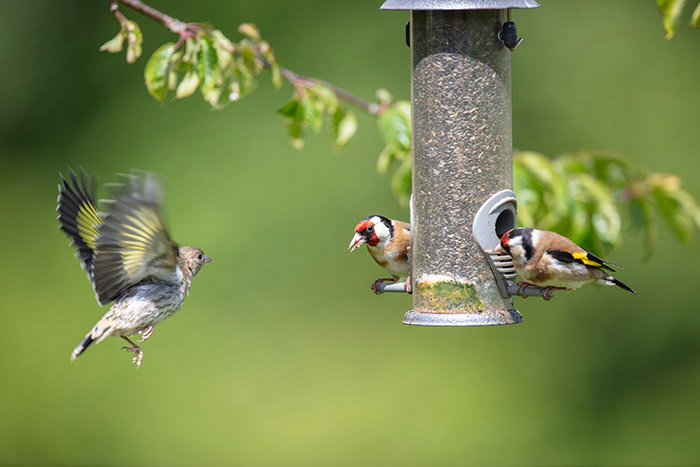 So far, I’ve only recommended keeping or removing bird feeders during specific seasons of the year for specific types of birds.

In spite of the fact that I have evidently made it quite plain that you should always provide common backyard birds with seed mixes, nuts, suet, and/or dried mealworms, I don’t see what’s keeping you from simply eliminating bird food rather than the hassle of bird feeders.

Now I would add that it can be more trouble than it’s worth to remove bird food at particular times to prevent it from being stolen or lost in poor weather.

However, putting these larger than usual bird feeders indoors is not likely in the event of anyone utilizing an open top platform on a pole, with one that hangs, or is a speciality platform ground bird feeder.

Since platform bird feeders are often constructed from wood, they are quite heavy and cannot be moved without damaging the floor underneath.

Removing the wild bird food and replacing it with solely new food is a more convenient approach for everyone involved than brushing off the remaining bird food and re-introducing it at a later time, when it might have spoiled or been contaminated.

A word of caution: touching wild bird food can spread Salmonella, which can make you sick if you’re not careful.

Once a storm, nighttime frost, or pests have passed, all you have to do is refill this platform feeder with new bird food.

In contrast to my prior recommendation that you should always leave out seed, peanuts, and other common wild bird food, the rules for hummingbird feeders are somewhat different.

Since hummingbirds in North America typically move to warmer climates in Mexico and Central America over the winter, it’s likely that you’ll need to empty your feeder before the season ends.

Thus, these hummingbird feeders will be completely unused come autumn, until some six to eight months later, when hummers once again migrate to the United States and Canada.

Hummingbird feeders should not be left up at this time because they will perish if they are not maintained regularly.

Hummingbird feeders, whether made of glass or plastic, should be taken down and cleaned thoroughly only after you are certain that all hummingbirds have departed the area.

Don’t be a slob and throw away your hummingbird feeder without giving it a good cleaning before putting it away for the season. Mold can grow within a nectar feeder, and if that’s still there when the hummingbirds return, a number of them will get sick.

Even though you might think all the hummers have left by early September, it’s best to wait a few more weeks to make sure there aren’t any stragglers.

The year-round availability of seed, peanuts, suet, dried mealworms, and other common wild bird foods should be maintained at all times.

In order to meet the requirements of some bird species, it is not necessary to remove feeders.

Different species of birds eat a wide variety of foods all year long, with some seasonal preferences such as eating more insects or seeds.

While this may be true for fewer popular backyard birds than you think, if you take down feeders under the false assumption that they won’t be used, you’ll be very incorrect. Forgetting to do so would mean starvation for other birds.

In light of this, I implore you to keep your bird feeders up all year round, regardless of whether or not you see a particular species utilizing them.

However, there are times when it’s necessary to bring in all of your bird feeders, whether it’s because of an impending storm or because the local rodent population has discovered your bird food supply.

Bird food is susceptible to damage from frost, so if low temperatures are predicted for the night, it is best to bring feeders indoors.

A moment comes each year when hummingbird feeders should be taken down.