Why Does My Dog Lick My Hands?

There’s nothing more charming than a sudden kiss or lick from your pet. By licking your hands your pet can demonstrate their affection and love towards you! Licking is generally thought of as a normal thing to do however, in certain situations, licking gets excessive and may be a sign of health concerns.

The act of licking your hands is an expression of love. Your dog may kiss your face or hands to show their love for you! It can be a good feeling for your pet as it may release endorphins. Experts also suggest that, in addition to showing affection the act of licking can be an indication of respect. 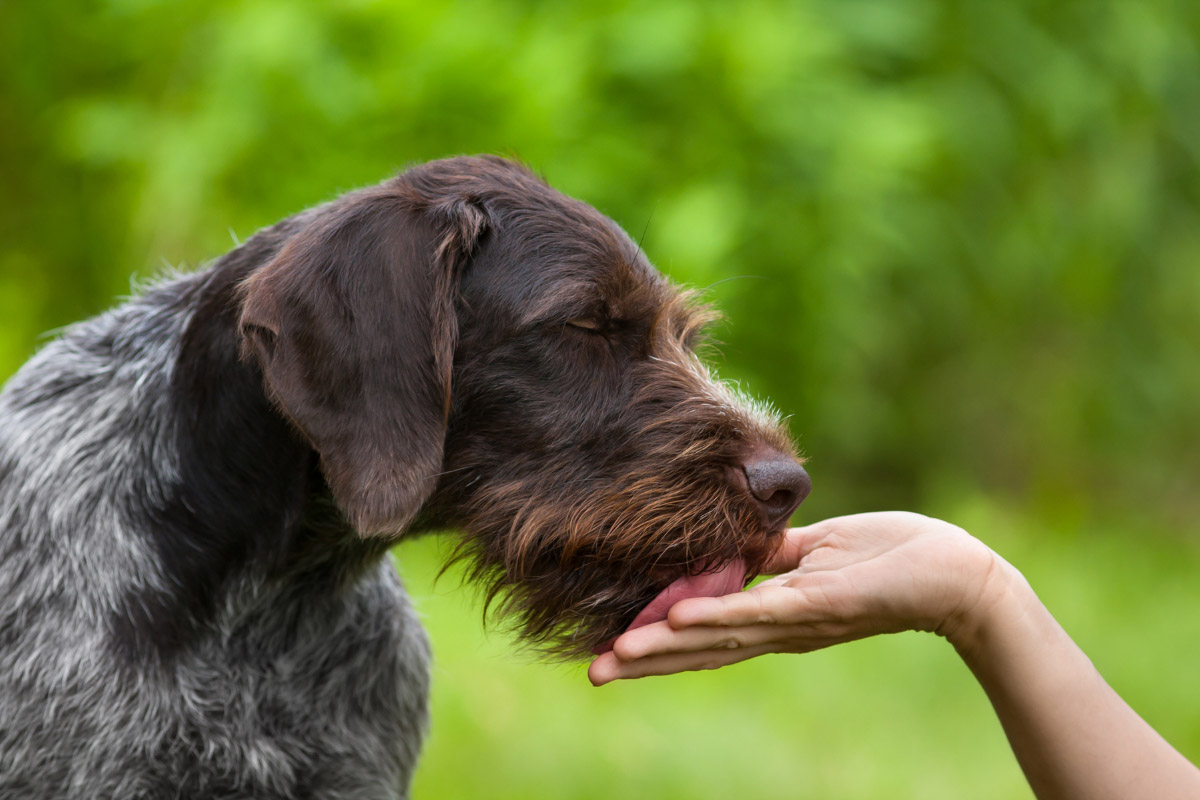 Reasons why my dog licks my hand:

There are plenty of reasons dogs will have a tendency to lick your hand. The reasons for this can be of two kinds – either it is a behavioural issue or your dog is suffering from something medical or physical which causes the licking. Here are some typical reasons that your dog may lick your hands:

The primary reason for the dog’s habit of licking your hands is the affection he has for you. The licking of dogs is usually seen as kissing because it is a way to express their love for loved family members. They are fond of licking their human faces when they are able to do so. If not, they’ll start licking other parts of your body such as your arms legs, hands, as well as feet. But, some dogs do not use the act of licking to express affection. Certain dogs don’t like to lick, but it doesn’t necessarily mean they don’t love you less! Don’t be concerned that your dog isn’t doing a hand lick!

Some dogs will lick their hands because they enjoy trying new flavors in the world. Because you are an important component of their world and they are a part of it, they may enjoy the smell of your hands as well. Dogs love things with interesting and new flavors. So, there’s the chance that they will love the salty smell of sweating on your hands inviting them to kiss your hands!

Another reason that dogs lick isthe habit. The behavior can be deeply embedded in their personality since the time they were puppies. As they grow older they observe and learn from their mother’s habit of kissing. As they grow older, they also begin to develop the habit of licking. There’s a good chance that your dog got the habit from their grandparents and, in this instance you do not have to be concerned about your dog’s continual touching of your hands.

The dogs are cleaner than we believe. They use licks to groom themselves , as the act of licking as a method to clean is common within our animal world. A lot of animals lick their little ones to keep them clean and shield their bodies from infection. Dogs are also known to lick for the same reason. So, your dog could be grooming you and keep your hair fresh!

Apart from feelings of affection and love In addition, licking can be considered an act of respect. Dogs are known to lick the person who is the most dominant in the family to show gratitude to them! 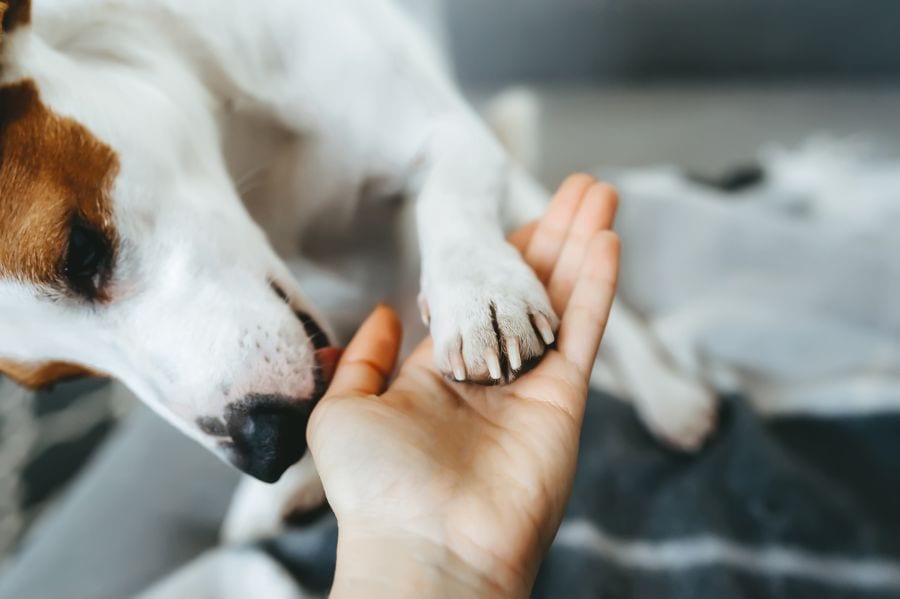 What does it mean when a dog licks your hand constantly?

Hands of dogs lick at random times. Sometimes it is an attempt to say hello. The habit of licking in pets is likely an ancestor of this behaviour which is a mix of greeting and begging. It can also signal subordinate rank. In certain instances, extreme or frequent licking can suggest a problem with compulsive behavior.

Is it harmful if my dog licks me?

The majority of the time, dog’s habit of licking is thought to be harmless, and many people let their pet to indulge in this behavior. Except for bleeding wounds that need to be treated, the act of licking generally not a risk! However, there are certain instances. In rare instances saliva of dogs could cause an infection to humans. Dog saliva contains the bacteria capnocytophaga. In excess licking, the bacteria to human skin, and cause infection to that. So, it’s highly advised to keep the bacteria in check by maintaining your dog’s dental health with a quality dental toothbrush as well as toothpaste.

How to stop my dog from licking my hands excessively?

If you’re not a fan of continuous licking your dog gets it’s fine! Human nature is to be clean and some people are unable to resist the smell of dog saliva on their hands, mouths or on any other area of their body. Here are some tips on how to train your pet to cease from licking.

To end your dog’s problem with licking, it is important to repress the behavior. Do not encourage them be licking, instead, move off from the dog, while being calm and peaceful. When your dog stops licking your and you are able to reward him with attention and praise. Giving them treats could also help!

You can give your dog Absolute Bites Freeze Dried Chicken Pet Treats every time it stops licking your!

Another method to stop your pet from licking your face is to keep them entertained with toys and food. We’re confident that your pet will stop licking your when you distract them with a ToyBone Nylon large Peanut Butter Dog Toy!

Dogs transmit different messages via the act of licking. While licking is typically considered to be normal behavior but excessive licking may indicate serious health issues too. The dog’s behavior and actions can be a way of communicating something to you. Therefore make sure to be attentive and listen to their actions! Don’t ignore any odd behavior by them, as they may be trying to convey something. Also, consult a veterinarian if you’re ever confused about why your dog’s behavior isn’t as normal! 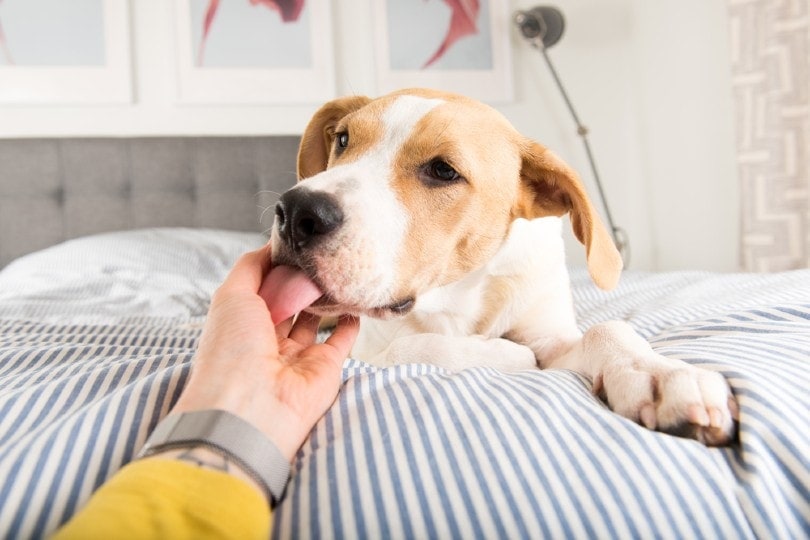 Why do dogs lick their private areas?

In the world of dogs it is commonplace to see a small amount of licking can be considered a the normal grooming routine. For instance either a male or female dog could be able to lick their genitals after having urinated as a method of cleansing the area. Normal, strong stool movements aren’t usually followed by that licking.

Why do dogs tilt their heads?

Dogs also do the same. Their heads are tilted in order to avoid their muzzles that are obstructing them and increase their perspective. The cute head tilt expands the vision and allows dogs to see more clearly faces of people.

Let a behaviorist or vet to examine any problematic behavior. If your dog loves to lick your hands repeatedly most likely, the licking behavior is a sign of an issue that is underlying.